Despite loving his FD1 FlexDrapers Colin Schulhauser was thoroughly impressed with the FD2.

It’s a given that you are going to have a little pioneer in your blood if you’re a fourth-generation farmer still proudly working the land that your family homesteaded back in 1905. That’s why it should be no surprise that Colin Schulhauser quickly said yes when he was asked to be among the first to run the new FD250 FlexDraper®, MacDon’s first ever 50-foot header.

“I guess they had already asked a few guys around here to try the FD2, but they all thought that 50-feet (15.2 m) was too big,” said Schulhauser who manages the family’s 6,800 acres (2752 hectares) with his 71-yearold father Garvin. With the help of two employees, the father and son team grow lentils, canola, wheat and barley near the town of Cupar, about 75 kilometers (47 miles) northeast of Regina, Saskatchewan.

For Schulhauser the offer last summer to participate in the R&D of MacDon’s next generation FlexDraper came at precisely the right time as he had just purchased two brand new CLAAS Lexion 8700 Terra Trac combines, and he was looking for the biggest headers he could find.

Despite being happy to try out the FD2, Schulhauser admits that moving up to 50-foot did give him a few practical concerns, including whether or not the combine’s unload auger would be long enough to reach his grain truck. “

The reach turns out to be a bit tight, but it works decently. I was also concerned about residue management with a bigger header spreading straw out that far, but our new chopper seems to handle it just fine.”

As far as field trials go, Schulhauser says that FD2 performed almost flawlessly, cutting about 1,800 acres (728 hectares) of lentils, canola and wheat with few issues. Best of all, they were able to run it side-by-side with their FD145 mounted on exactly the same combine, giving him an excellent chance to evaluate the FD2’s upgraded performance under controlled conditions.

“I was impressed when I first saw the FD2. It’s a completely new header and not just a few extra features added to the FD1. It’s a total redesign, which is good because we needed a header that could match the productivity of the new combines.”

One of the most significant improvements he noticed was the depth of the FD2’s 50-inch deck, 8-inches deeper than on the FD1.

THE DEEPER DECKS MAKE A BIG DIFFERENCE. IN HEAVY CROP CONDITIONS FEEDING MATERIAL INTO THE COMBINE HAS ALWAYS BEEN THE BOTTLENECK AND A MAJOR ISSUE FOR A LOT OF GUYS.

Schulhauser admits that it never occurred to him that the solution was to make the decks deeper.

“Before seeing the FD2 I had thought that the problem was in the combine adapter with the feed auger, but it turns out that the draper decks were just over capacity, resulting in material being pushed too far back. That was causing the upper cross auger to work too hard trying to rip the material across, down and underneath.”

NOW WITH THE 50-INCH DECKS THE CROP SITS WAY DOWN ON THE DRAPER SO IT IS ABLE TO FALL IN HEADS FIRST UNDER THE AUGER WITHOUT THE AUGER HAVING TO DO ALL THE WORK. EVERYTHING JUST FLOWS A LOT SMOOTHER BECAUSE MATERIAL NOW STAYS ON THE CANVAS. IT’S A HUGE IMPROVEMENT.

Another big difference Schulhauser noted between the FD1 and the FD2 is the amount of additional flex the new header offers.

“Moving up to a 50-foot header I was concerned with it being able to flex enough in our rollier, hillier land, but after seeing it run beside the FD145 it actually out-flexed the shorter header. I think they say they added 70% more flex over the FD1 and I believe it. It’s really amazing how much that header bends, so much so that it makes the FD1 not look as good, but I guess that’s something they needed to do with a next generation header and I’m happy they did it.”

Schulhauser says that their FD2 was outfitted with MacDon’s new ContourMaxTM Contour Wheels, a new performance option that works with the FD2’s Flex-Float Technology® and the combine’s auto header height control to allow the header to instantly react to changing field levels. The result is a header that can cut at a consistent height up to 18-inches off the ground, even under extreme conditions.

“The ContourMax wheels make a huge difference. In fact, we wouldn’t be able to run a 50-foot header on our land without them because it is too uneven. In some of our draws cutting cereals with a 50-foot header just wouldn’t work, because there are places where your wings are almost bent right up in a field position. But with the ContourMax wheels we were able to maintain a consistent cutter height, even at 50-feet. Even better, we didn’t even have to get out to adjust them because they are adjustable from the cab.”

One of the things Schulhauser didn’t think needed improving on the FD1 was the header’s cutting ability, as he already thought that it was very good. Despite that, the FD2’s all new high-speed cutting system turned out to be such a marked improvement that he couldn’t help noting the difference.

“I never thought cutting was an issue, but the new knives cut way cleaner and smoother than those on the FD1. When you see the FD2 work in a field of lentils side by side with the FD1 there is a clear line between where the two headers cut. The FD2 just cut a lot cleaner across the board; there was nothing left sticking up. Even the MacDon guys who were out in the field with us couldn’t believe it and they kept checking the FD1 over to make sure that it was set up right, but it turned out that the FD2 just cut that much better.”

Some of the FD2’s improved hug-the-ground performance in low podding crops can also be attributed to the addition of a third reel to the frame’s center section, standard on 45 and 50-foot models and optional on the 40-foot version. This third reel makes it easier to achieve an exceptionally tight reel to cutterbar relationship on those longer FlexDrapers for smoother and more consistent heads-first feeding to the combine, even at extreme flex.

“I really liked the way that triple reel worked. On the 50-foot that center section is wider so I don’t think that you could get as good a flex without it. It’s also nice to get that center divider moved out of the way and I found that there was a lot better vision with the triple reel.”

While most producers are always looking for more speed at harvest time, Schulhauser surprisingly reports that one of the big advantages of the FD2 is that it allows him to run his big combines at a more comfortable speed in cereals.

“The first year I ran a LEXION 8700 I had it mounted with a demo FD140; I was travelling 7mph (11.3 km/h) and still couldn’t fill the combine. Sometimes I just don’t like to run that fast because I think it is harder on equipment. That’s a big reason why I like the 50-foot FD2 because it lets me slow my travel speed down while still cutting a lot of acres.”

Conversely, in his lentils Schulhauser says he took advantage of the FD2’s increased capacity to run a little faster and get a bit more done each day.

The field trial even gave Schulhauser the chance to try out the FD2’s all new transport package.

THEY HAVE MADE SOME REALLY NICE IMPROVEMENTS. WITH THE FD1 EVERYTHING SEEMED HEAVY AND HARD TO DO WHEN YOU WERE PUTTING IT INTO AND OUT OF TRANSPORT MODE, WHEREAS WITH THE FD2 EVERYTHING IS MUCH FASTER AND EASIER TO HANDLE.

Even though the FD2 Schulhauser was working with was a prototype, he says that he was so impressed with its performance that he made sure to secure a second one for this year’s harvest.

“MacDon’s engineers said that the header they had given us wasn’t even pre-production but rather pre-pre-production. But from what I saw I thought that their header was ready for production as is. For farmers who might take a wait and see approach when the FD2 is released I would say from my experience the bugs have been ironed out.”

“This is absolutely a generational change in header technology. It’s a night and day improvement, and what we need to keep up with the new combines coming out.” 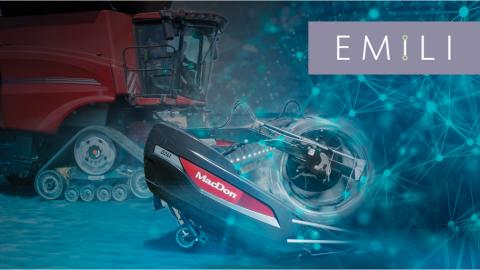 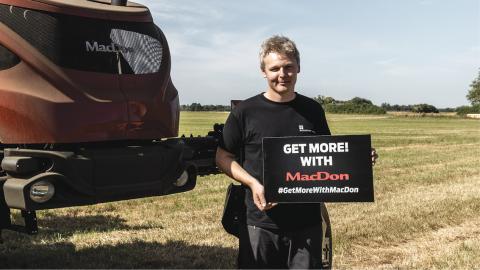