Because of Keith Reeds’ rolling, rocky, and uneven terrain, he was happy to make friends with Contour Buddy!

Just 90 minutes northeast of Toronto, Ontario’s Kawartha Lakes district with its 250 lakes and rivers offers a convenient escape from the congestion of Canada’s largest city. But tourism is only part of the region’s economic story. Agriculture is also an important contributor, and almost 1300 farms can be found scattered throughout the area.

It is here on the farm of Keith Reeds that MacDon demoed its new Contour Buddy, a FlexDraper® attachment that allows the header to be held off the ground at a steady height, while still permitting it to fully float and flex. Now, for the first time, operators can reliably achieve a consistent stubble height over rolling, uneven terrain.

Reeds, who has now owned five FlexDrapers with his purchase of a new FD140 last year, says that his farm may have been selected for the demo because of his willingness to trial new ideas.

“I say yes to everything, which is why I think my MacDon rep Joel Woods thought we were a good place to try the Contour Buddy,” joked Reeds. “Previously, I had been using gauge wheels and I never really did care for the job they did for us. That’s why I think Joel suggested that we try the attachment. Plus, he also knows my combine operator really well so he knew he would get some good feedback from us.”

A strip-till farmer for the last eight seasons, Reeds crops about 3,500 acres (1400 hectares) near the town of Lindsay. Up to 2,000 of his acres (800 hectares) are set aside for soybean production with the remainder split 50/50 between corn and wheat.

“The land around here is gently rolling with some hilly ground to the south of us. The soil is variable, ranging from clay loam to sandy loam,so we’ve got a bit of everything plus lots of stones.”

It was in his wheat that Reeds first deployed the Contour Buddy last summer, hoping that the attachment could help him achieve more precise control of his stubble height as residue management always plays an important role in strip-till farming.

“We set our Contour Buddy on its lowest setting because we wanted to get as much straw as we could. We’ve got some rolling ground with some dips and dives, so cutting really low is usually a challenge for us.”

While Reeds admits that he made only a few passes himself with the Contour Buddy, he says that his combine operator gave it a thumbs up simply by not reporting any issues with the attachment.

“He’s a super employee for me, but a man of few words. If something is not working he will tell me ‘it’s not worth [the money].’” But Reeds didn’t need to hear a vote of approval from his operator, as he could see the results for himself.

“Overall, the Contour Buddy did just a phenomenal job for us. The height of our wheat stubble was the same all across our entire farm. Operation of the combine was also way easier for my operator because he could just drop the head and go, kind of like being in FlexDraper mode. It not only helped the combine run smoother, he was a lot less grumpy.”

Both Reeds and his operator were also pleased at how easy it was to install the Contour Buddy, which they did themselves.

“There are not too many bolts to install it. We originally had it on our FD75 at first, but then we moved it over to our new FD140. There were just a few adjustments to make switching it, but it wasn’t a big deal. It is also very simple to take on and off once you have the hardware on there; like only 10 minutes to take them off the head if you need to go from wheat into soybeans and go full flex on the ground.”

“I would recommend the Contour Buddy to anybody with rolling fields, even if the sticker price seems a bit high. It’s the same story as when I bought my first MacDon head; everyone said that MacDon’s are a lot of money, but to me they are worth every penny you spend. It’s been the same with every new MacDon head I’ve bought.”

Reeds’ first experience with MacDon started about 10 years ago when he purchased a FlexDraper to cut his wheat and soybeans for his Case IH combine. This was shortly before he started strip-tilling on his farm and both decisions are in keeping with his willingness to explore new ideas for his farm.

“When it comes to new practices and technologies I’m not always on the leading edge, but in this area I guess you could say I’m an innovator. I got into strip-tilling because the idea kind of intrigued me. I had gone to a few demonstrations and I liked the idea of being able to do minimum tillage as well as being able to put fertilizer right in the ground. At the time we had been doing some no-till vertical tillage, but I just didn’t like having to broadcast the fertilizer and maybe losing some of the nutrients. It felt safer putting the fertilizer right in the ground with strip-till.”

While Reeds believes strip-tilling has been an overall benefit for his farm, he says he doesn't have any strong numbers to confirm it one way or another.

“I’ve either seen benefits or I am really stubborn,” chuckled Reeds. “It’s really hard to tell because we don’t do head to head comparisons. On our strips that have been established for a number of years, grid and soil sampling indicates that our potash levels have come up. Yield wise it’s harder to say because we don’t really measure side by side in the same field. When I listen to the coffee shop talk and what everyone else is getting for yields I’m thinking I am not leaps and bounds ahead for what I have invested, but then again are they telling me their best yields while I am only reporting my average yields? That’s something I am not sure of.”

But when it comes to his decision to move to MacDon drapers, Reeds is much more confident it was the right one.

“MacDon headers have proven themselves to me over the years."

"Every time I look at a new flex head they keep seeming to come up with some new innovation so I never have any reason to switch. In fact, my dealer seems to want to sell MacDon heads more than their own heads. They must feel that MacDon is a good quality product for them to stick with them like that.”

And some of his dealer’s confidence in MacDon likely comes from his own farm’s experience with the product.

“My local salesman works for me a bit after hours. Luckily, he likes to work late at night so that allows us old guys to go to bed. For him he likes the work because he gets to see the performance of the equipment that he is selling. His opinion has definitely played a big part in swaying me over to the MacDon side.”

That sales influence must also be having an impact on other farmers in the area as Reeds says he has seen more FlexDrapers in use on neighbours' farms.

“I would say that most of the guys that are innovative around here are buying FlexDrapers, but it has taken a while for that to happen. Price has been the major barrier. These are the same people who said back when I bought my first FlexDraper that they couldn’t see themselves spending the extra money. But in the end the FlexDraper is just one of those things that you have to bite the bullet, sign the check, and then be happy.

One of Reeds’ most recent MacDon purchases is MacDon's new C Series corn head. Despite a lighter than normal corn yield last season, he reports that the header has lived up to his high expectations for MacDon equipment.

“Overall, the build quality seems to be very good and maintenance has also been pretty straight forward. There are some nice grease banks to grease with and there’s not too much maintenance to it actually. To be fair though, we have only run it one season, but it did perform just fine.”

In purchasing his C Series Reeds decided not to go with a key feature on his previous corn head.

“We decided not to go with a chopper on C Series because right now we are strip-tilling in the spring and then planting our corn on the strip. Then, when we harvest in the fall, we move the strip over 15” to go to the center of the row to avoid pulling up root balls and stalks of corn. If we were using a full chopping head to harvest we would put too much residue across those rows, and that would give us problems if it was wet.”

“I was a little bit nervous using the new C Series head without the choppers on it, but we haven’t had any issues. It’s done a terrific job.” 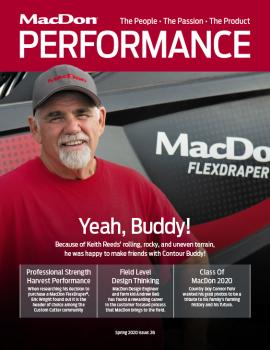 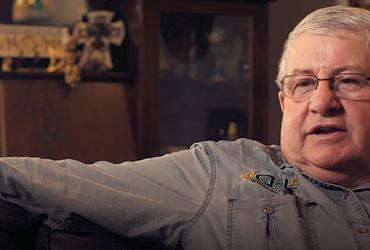 It’s a short video from 1989 that belongs in a museum. Custom cutter Jim Deibert is sitting in the middle of a wheatfield, halfway out... 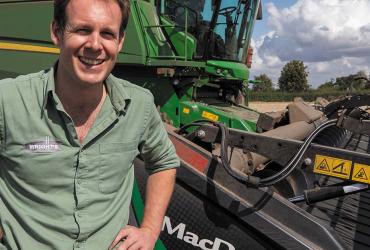 When Eric Wright of Wright’s Agriculture – a U.K based family farm and contracting business – was considering investing in MacDon FlexDrapers...