Michael Austin of New Zealand loves the ability to work in the US with the latest harvesting technology on Jim Deibert's custom cutter team.

When combine driver Michael Austin states that his hometown is Te Awamutu, he’s well aware you’ve likely never heard of it before, and even more than that, may not be able to pronounce it, either.

"You want me to spell that?" the 24-year-old asks with a laugh over the phone.

But the small town of just over 10,000 in the Waikato region of the North Island of New Zealand does have some fame. It's known as "The Rose Town of New Zealand" because of the massive rose gardens in the center of town. Plus, it’s only a 45-minute drive away from the Hobbiton set used in both The Lord of the Rings and The Hobbit films. And, it's known for its agriculture and farming industry, a profession Austin was born into.

Austin's family owns a custom harvest and chopping business; they go from small farm to small farm, sometimes hitting several in one day, hired by those who don't have the means to have their own equipment. They spray, and cultivate, and plant and, harvest using their own gear, which would otherwise be unavailable to their clients.

The bulk of New Zealand's farming (which is responsible for around two-thirds of the goods exported from the country) focuses on pastoral farming, cattle, sheep, and, especially in Austin's area, dairy. The land dedicated to horticultural crops such as stone fruits, kiwifruit, and avocados, as well as arable crops, is on the rise.

Even still, nothing quite prepared Austin and his wife, Nikita, for the expansiveness of the North American harvest.

The pair is currently working for longtime MacDon customer Jim Deibert, traveling from his home base in Colby, Kansas, to Texas and ultimately up through North Dakota harvesting wheat, before heading back to Texas to start on corn.

"The North American harvest is something that everyone in the agricultural side of things around the world is probably pretty keen on doing, and for me, it was something extremely different to home," said Austin from one of the team's stops in North Dakota this past summer.

"We have two of our own combines, but the scale of what we do is nothing compared to what they do over here, and so it’s neat to see. And I always wanted to travel and work overseas, and America seemed like the place for me to go."

This run is Austin's second time in North America working for Deibert. He was just 18 years old the first time he came over in 2014. The experience was unlike anything he had participated in before, he enjoyed it and wanted to go back if and when he had the chance to do so. Being able to bring Nikita, who also has a background in farming, along for the ride, was a bonus.

But the literal and figurative change of scenery didn't come without some growing pains and challenges. Although the crops Austin encounters here are altogether not that different than what he sees in New Zealand (grass silage, maze silage, wheat, barley, canola, corn), the technology and sheer volume of land that needs to be covered were unlike anything he had encountered before and definitely took some getting used to.

"It is very different in that way, that's for sure; I'm just not sure how to explain it really! At home, you might go to three or four different farms a day, whereas over here, you're on one expansive land for quite a while. It's just vast and enormous," Austin said.

"We have two of our own combines, but the scale of what we do is nothing compared to what they do over here."

Oh, and he had to learn the hard way that in North America, we drive on the right side of the road.

"The truck driving as well, that was a challenge to learn, I'd never driven a truck, and the first thing I did in North America was drive a truck on the wrong side of the road. That was probably the biggest challenge," Austin chuckles. "The driving at home in itself, we've got a lot of holes and small fields and tricky terrain to work with, whereas over here, it's just such big, expansive, amazing spaces."

The access to top-of-the-line machinery, too, was something Austin was unaccustomed to, which he considers not so much a challenge but more of a pleasant surprise that made his time in the field much easier.

As a kid, Austin was allowed to "play" on combines but says his work overseas was the first opportunity he had to run one and be solely responsible for the machine. He adds that his experience has been incredibly positive because of Deibert's commitment to owning the best, safest machinery for the job, which includes six MacDon FD140 FlexDrapers.

"I've been running with Jim, and a lot of gear and equipment they use is really up to the highest of standards. It's new, and they're running at the forefront of technology, whereas a lot of places you see around there's still a lot of old machinery running, and it's cool to see," Austin says of Deibert’s fleet.

Austin is getting ready to wrap up his second season. Though he is happy to head back home, he says he’s going to miss the ease of working with Deibert's team and the opportunity they give him to relax and fully enjoy the work he's doing.

"It's just really nice for me as a driver; it's quite a low-stress environment. I know for Jim it's not so much, because it's his livelihood on the line, but it's definitely a lot more relaxing driving in these big fields," says Austin. "You can just enjoy what you're doing a lot more without worrying about a whole lot of other things." 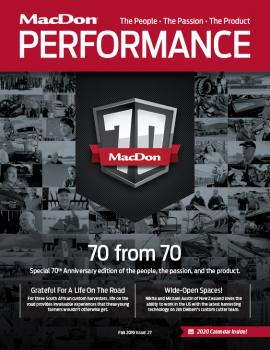 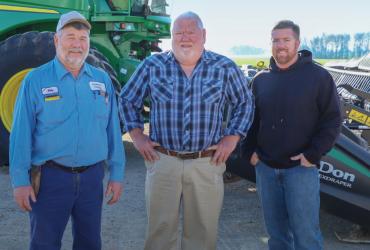 Grateful For A Life On The Road

A lot of jobs require some travel – but that typically doesn't mean being sent across the world for seven months at a time. ...