The legend of Bigfoot

“When we showed up with it, our customers thought we were nuts. They would say ‘kid what are you thinking?’ ”

The year is 1988. Ronald Reagan is entering his last year in the White House and the first Die Hard movie is filling the theaters. Every custom cutter in America is also taking on the year’s harvesting work with auger platforms mounted on their combines, just like they have for the last several decades; that is, every custom cutter except one.

Jim Deibert, based out of Colby, Kansas, is trying something different this year as he joins the convoy of custom cutters who will follow the wheat harvest from the Texas panhandle to the Dakotas. He has agreed to help MacDon “put some time” on one of their draper headers. It seems that MacDon has come up with the radical idea of providing farmers with a header that can be used for both swathing and direct cutting with their combines, an idea that will save them the capital cost of a second header. They’ve already proven that the concept works – they just need some extensive field testing of their latest prototype unit before putting it into full production. Jim Deibert, who usually cuts 30,000 acres (12,140.6 hectares) of wheat a year along with 15,000 acres (6,070.3 hectares) of corn and 2,500 acres (1,011.7 hectares) of soybeans, is just the man for the job.

“Back then we were running John Deere 8820s with 30' (9.1 m) auger platforms,” recalls Deibert who said that he was more than ready to try something different at the time. “It wasn’t like we were replacing something that was working great. I wasn’t happy with my auger platforms; I fought them all the time.”

But as willing as Deibert was to try something new, his first glimpse of the 36' (11 m) draper header that MacDon brought down didn’t fill him with confidence.

“When they arrived with the header I was skeptical that something that big could work. It looked like a man among boys when they sat it in line with my other machines, like having a guy who’s eight foot tall and everybody else is five. It was a real crowd stopper when we would park our combines along the road – people would just stop and gape, it was just so darn big.”

So big in fact that it didn’t take long for people to start nicknaming it.

“I think it was one of the kids that worked for me who came up with the name Bigfoot, but we also called it Big Bite. It was called lots of things.”

Deibert says that his initial skepticism of the header quickly turned to delight once he saw it in action.

“A lot of people said that it would never work, yet we put it right beside our other combines and it was doing as good or better job than our augers. One of the first things that impressed us was the smooth, heads first flow of material into the feeder house. We found that we could cut just as fast with that 36' (11 m) draper as our 30' (9.1 m) auger platforms in heavy crop, so we were gaining about 25% in productivity. In light crop we could go even faster. We also found less grain behind the combines with the 36' (11 m) draper than we did our 30's (9.1 m), because our augers weren’t feeding as smoothly as the draper did.”

He also says that his operators preferred to run his draper machine over those with augers, as the “set it down and forget it” capability of the draper made it much less fatiguing to operate.

Despite his and his crew’s growing confidence in the machine, Deibert reports that they faced skepticism just about everywhere they went that first summer.

“When we showed up with it, our customers thought we were nuts. They would say ‘kid what are you thinking?’ A lot of people would come out to my field and ask ‘can I ride that thing, I’d just like to ride on it and watch it work?’ After they did they were just like ‘wow!’ They could understand where I was coming from.”

“Here’s the kicker old men – I mean guys who had farmed back in the 40s – would come up to me and say, ‘kid, we have now gone full circle’.”

We used to have canvas platforms on our old Masseys, but got away from the canvases because of all of the headaches we had having to take them off every time it rained. MacDon solved that problem, of course, with rubber drapers.”

As well as that first draper worked, however, Deibert reports that it wasn’t without its hiccups.

“That unit, the first year held up reasonably well, but like any piece of experimental machinery it wasn’t perfect. When the temperatures got to a hundred degrees, the hydraulic oil would heat up and we couldn’t run. After about three days we figured out that we could cool the hoses using an automatic transmission cooler off of a pickup, and then our heating problems were over.”

So was Deibert’s affiliation with auger headers. Over the next two seasons he converted all four of his combines to drapers. “I would say it took only four or five years for most custom cutters to start using the draper as well. I was the only one running them in ’89, but then in ’90, ’91' and ’92 a lot of people began buying them. Today, when you sit along a road and watch the harvest convoys go by you’ll see a lot of drapers, and a lot of them MacDon. Now I would say that drapers are 90% of the custom cutter market. There are very few auger platforms left.”

“I really like MacDon as a whole. They’ve been excellent to me and they’ve always been open to my suggestions. I can show you all kinds of things through the years that we’ve asked for and they’ve incorporated those changes to their product. They show they’re listening, and that is good. I end up with a better product for me, and they end up with a happier customer and less warranty issues.”

Deibert figures that he has purchased more than 50 MacDon Drapers over the years. Most recently those have been FlexDrapers, which he calls the “Cadillac” of headers. “The first year the FlexDraper® came out I bought one. The next year I bought two, and the third year I bought four. They just made a lot of sense for us financially, because we can cut both soybeans and wheat with just one header. We also like their tradability, because there is always someone wanting to buy them. We do the math and figure out the cost of ownership on a per acre basis, and the FlexDraper® comes out way ahead.” 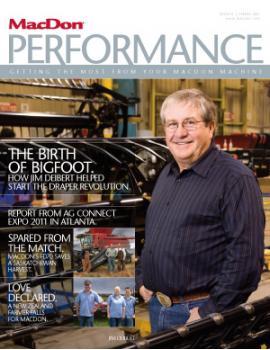 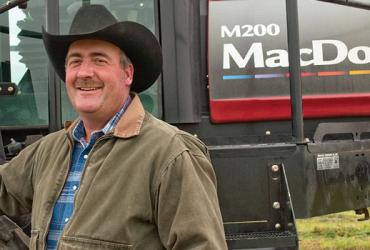 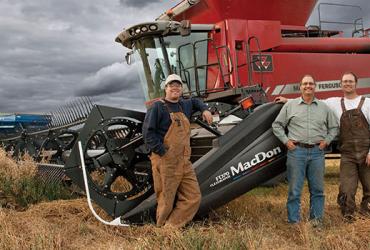 Products mentioned in this article: M Series SP Windrowers, FD75 FlexDraper® Headers for Combine “We had neighbors shaking their heads wondering how we did it.” ...