For Bruce Furrer his experience with MacDon made buying the C Series a chance he was willing to take. Two seasons in, he couldn’t be happier!

No farmer needs a lesson about the impact plant science has had on world food production, but a quick look at the year 1937 is none-the-less interesting. That year, U.S. corn farmers would enjoy their best harvest since 1925, producing 2.3 billion bushels on about 97 million acres planted for an average yield of 28.9 bu/ac (USDA statistics). This bumper crop, one of the last before hybrid corn became dominant, was within a bushel of the county’s record average yield and about the best farmers could hope for using the open pollinated varieties of the day.

Now fast forward 80 years to 2017 when U.S farmers achieved an average yield of 176.6 bu/ac, producing 14.6 billion bushels of corn on 90 million acres planted. Let that sink in; that’s more than six times the corn on 7 million fewer acres, and almost all of it due to farmers taking advantage of ever-better varieties and crop management practices. But such advances have also brought new challenges for corn farmers. In practical terms alone, a 600% increase in production means both more plants, and much bigger plants, on every acre planted. In response producers have not only been forced to invest in ever larger, more productive equipment, but also find better ways of dealing with the increasing amounts of trash, or plant residue, left in their fields.

Which brings us to Bruce Furrer of Wolcott, Indiana, who manages a farm of about 3,000 acres with his son Caleb and son-in-law Trent Bahler. Together, the trio have been running a new MacDon C Series corn head for the last two years, their first chopping head ever. Furrer says that before getting their C Series they had been looking for quite a while for a better way to deal with their corn residue, especially the stalks which have seemed to get thicker by the year.

“The seed companies have done a very good job in breeding healthier stalks into their hybrids,” said Furrer. “Thicker stalks make it harder for our residue to break down and decompose quickly. Also, if you are going to do spring tillage at all, there is always the potential with these healthy stalks of having your field cultivator drag up on shanks, which can then cause ridging or other problems. So our whole objective for quite a while had been to find something to manage our residue better, something that could break it down faster without also having to do more tillage.”

Despite the residue in their fields becoming a growing nuisance, Furrer says they had held off getting a chopping head for quite a few years because they weren’t completely satisfied with the options available to them.

“There are a lot of rotary chop heads around here so we’ve seen what they can do. I actually demoed a roto-disc head about four or five years ago and just didn’t feel like it was giving us enough residue breakdown. I wanted more.”

Then in 2019 they had a chance to see MacDon’s new C Series in action side by side with other chopping heads.

“We followed the combines at the Farm Progress Show and saw the MacDon head perform side by side with the roto-heads. We were really impressed with MacDon’s chopping blade concept, which wasn’t available on the other ones. It just looked like it was doing a much better job of sizing the residue than the roto-discs and could give us more stalk exposure and better processing for improved microbial breakdown.”

Even though they liked what they saw, Furrer says what really convinced them to purchase the C Series header was the confidence they had already developed in the brand thanks to running two MacDon FlexDrapers.

“Our experience with MacDon equipment started with a strong recommendation from our dealer Bane-Welker, which was pushing MacDon drapers for our soybeans and wheat. Once we ran the first one, we quickly understood how it increases your productivity because of the even feed of the head. Now I don’t have experience with competitive drapers, but our dealer says that they’ve got guys who’ve bought the other ones, then traded them off to come back to MacDon.”

According to Furrer, their previous experience with the MacDon brand was instrumental in helping them shelve any concern they might have had about the C Series being developed initially in Europe.

“We had heard that the C Series wasn’t an original concept to MacDon, but our experience running MacDon draper heads just gave us confidence in MacDon as a company. Our thinking was that MacDon wouldn’t be selling the head if they didn’t have a lot of confidence in it because they wouldn’t want to ruin their reputation.”

And that’s how the Furrer’s farm became the first in their part of Indiana to run a MacDon corn head. It was a leap of faith that brought immediate rewards.

“That first season running the C Series it was just a night and day difference for us with the residue. We were actually able to run a Case IH 2500 inline ripper right behind our combine, something we’ve never been able to do before. In the past if we wanted to decompact a field we would have had to use something with disc blades in the front because you’ve got to deal with all that residue first.”

But Furrer says that he wasn’t the only one impressed with what the head was allowing them to do.

“Our MacDon rep Bruce Wyatt was out that day we were making our first run and he couldn’t believe that we could do that, but once your residue is sized you can do anything that you want.”

Now after running the C Series for the last two harvests, Furrer says that header has given them a few other things to be impressed about. High on the list is that the header requires much less horsepower than he expected.

“We typically harvest our corn at about 24% moisture and that was probably the reason that we didn’t purchase a chopping head sooner because we had heard about how much extra horsepower chopping heads require. But now I can say that if this head is using more horsepower I honestly don’t notice as an operator. In fact, this year we actually started harvesting at 32% moisture with green stalks and was still able to run the combine at 3.5 to 4 mph, which is pretty much the same as we would have with a non-chopping head. Even with all that moisture we still had all the power we needed for our separating capacity.”

Furrer believes the reason the header has had negligible impact on power consumption is because of how efficient the header’s knives are in pulling residue to the ground. It’s something MacDon’s engineers will be happy to hear, because that’s precisely the idea behind their OctiRoll™ Residue Management System which is designed to not only deliver more thorough stalk cutting, crimping and chopping, but also significantly reduce the combine’s overall trash intake.

“I think we’re not seeing a need for more horsepower because the header does a better job cleaning up the crop before going into the combine compared to other heads. The serrations on the knives even put little holes in the stalks, which also helps with enhancing their decomposition. That has become a big plus for us.”

Another important benefit Furrer has received from the header is how easy it is to clean in the field.

“Because I grow both GMO and non-GMO corn the cleaning ability of a head is very important. With the C-Series the snouts aren’t open so there are no places underneath where crop can collect. Its simpler overall design also helps because there’s just not as many places for crop residue to get caught as with other brands. I can’t say exactly how much time it has saved us, but there has definitely been a reduction in clean-up time compared to my previous head.”

Furrer has even been impressed with the header’s overall durability and reduced maintenance requirements.

“Before buying the header we had some concern about breaking the chopper blades on rocks, but because the blades are made with a softer steel we have found that they tend to bend instead of breaking. If we hit anything we can just bend them back into shape right on the machine. As a result we have never had to throw a blade away, so we are more than satisfied as far as the durability of the blades goes.”

“Overall maintenance of the head has also been very good; in fact it has exceeded our expectations. We especially like the tensioner on the gathering chains which does a really good job keeping the chains tight. That means less wear and longer life.”

Overall, Furrer says that their investment in the C Series has been a good one for their operation, as it has not only improved their residue management, it has also reduced the number of passes they have to make in their fields tilling.

“By being able to chop with this new MacDon head we are saving a lot of horsepower and also saving on equipment. Without it we would still have to disc ahead of time, and still wouldn’t get the quality of tillage that we are now getting following the combine.” 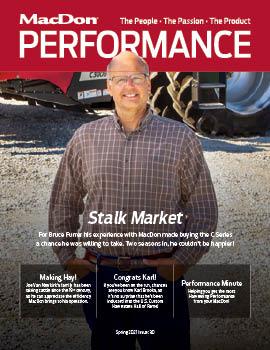 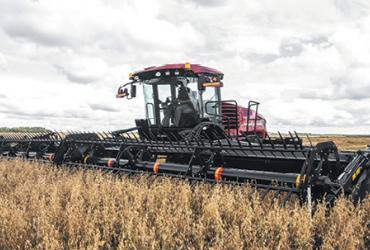 Keep Your Harvesting Options Open! As a farmer you deal with risk every day, so a little bit of control goes a long way. MacDon... 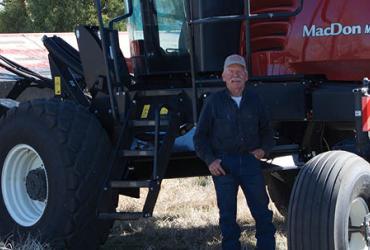 To say cattle farming runs in Joe Van Newkirk's blood would be a bit of an understatement. The family-owned ranch he currently owns and...