“We would travel the earth to find the equipment we want. MacDon® has always been ahead of the game compared to their competitors.”

Raising hogs is a messy business. With each finishing pig producing up to 18.5 gallons (70 liters) of slurry a week and sows even more; pork producers are constantly challenged with what to do with all that muck.

The easiest solution for most producers has always been to spread the untreated slurry on nearby fields as an easy and inexpensive fertilizer. But what if spreading your slurry is no longer an option? That’s exactly the dilemma that was facing Scotland’s Gask Farm in 2001 when impending legislation by the Scottish government was going to outlaw the use of untreated animal by-products in this way.

“At the time we were using our pig slurry as well as waste from local abattoirs, to fertilize our fields,” said Andrew Rennie, part owner of Gask Farm with his parents John and Monica. “New legislation was coming in and the local environment agency wasn’t prepared to sign off on our continued use of waste from local abbatoirs as fertilizer in this manner. The manure would have to go for further processing and treatment before it could be used on our fields, so that’s when we started looking for options.”

Their search took them to Germany where a new process was being used to treat animal waste and reduce a farm’s carbon footprint. Called anaerobic digestion (AD), the concept features the installation of a large tank on the farm, into which manure and other organic waste products are fed. Bacteria inside the tank then break down the material in the tank’s oxygen free environment. The result is a methane rich biogas which can then be used to generate electricity for the farm, while the spent tank material, laden with nutrients, can be employed as a mineral fertilizer replacement.

After visiting several German farms where anaerobic digestion was being used, the Rennies were convinced and decided to pioneer the idea back in Scotland. At the time, only one farm in England, and none in Scotland, were employing anaerobic digestion so they had to work closely with government agencies to get them onboard with the concept and obtain the necessary paperwork.

“We spent four years in the design of the system and getting all of the licenses and permits in place. When we were finally ready to build at the end of 2005, it only took a few months to install the digester, plus a few more to get the bacteria up and running and producing electricity.”

Now a little more than eight years on, the Rennie’s initial £2M (approx. $3.1 M US at today's exchange rate) investment in the digester is paying big dividends for both their farm and the surrounding area. Not only does it handle all of the slurry from the 280 sows and 6,500 pigs they fatten annually, they’re also taking on organic waste from nearby abattoirs, fisheries and even bakeries.

“We currently contract with 12 local companies to receive their organic waste, diverting it from local landfills. About 75% of the digester’s throughput is from third party sources.”

But the benefits of the system don’t stop there. Thanks to the digester, Gask Farm is producing a remarkable 500 KW/hour of electricity year-round. Of this, only 12% is retained

“We’re operating at full capacity right now in terms of the amount of electricity we can sell to the national grid. We could produce more but a number of windmills have gone up around here in the last five years, and they take up all the capacity.”

In this remarkably efficient system, waste heat captured from electricity generation is then used to pasteurize the spent material, or digestate, that is removed from the tank, rendering it safe to spread on Gask Farm’s cereal crops. Altogether, their digester is able to produce 15,000 tons (13,608 mt) of digestate a year, supplying 95% of the farm’s nitrogen and 85% of the P & K requirements for its crops. All fields are GPS mapped by Soyl Precision Farming. The extra P & K requirements are applied in granular format and spread using a variable rate applicator to the parts of the fields that require it.

“Normally raising pigs leaves a fairly hefty carbon footprint, but we’ve actually managed to go carbon negative employing this anaerobic digestion system, even taking into consideration the extra fuel that’s consumed transporting waste from the abattoirs and bakeries to us.”

“It's all part of our drive to be as eco-friendly as possible, which sees all of our crops fed to our pigs and then their manure turned into both electricity and fertilizer for the crops. That’s our green circle of life.”

For their swathing, the Rennies have relied on MacDon® SP Windrowers since the early 1990s, even though their machines are a little more challenging to acquire due to limited distribution in the UK. Despite their relative scarcity, Andrew says that seeking out MacDon® built machines has been worth the extra effort.

“We would travel the earth to find the equipment we want. MacDon® has always been ahead of the game compared to their competitors. The nice even swath that they leave makes it easier to come along and pick it up afterwards.

They’re also simple to drive and easier to operate and manoeuvre in the fields compared to others. That’s one of the reasons we’ve stuck with them.”

“Our swathing season lasts between 10 to 15 days, and during the middle of the season the machines are running 24 hours a day. If something happens to the machine and you have to wait a few days for parts, then you’ve lost a big percentage of the season. We therefore look for equipment that is strong, reliable and robust. It must also have a good dealer standing behind it as well.”

Currently, Gask Farm is using two MacDon® Self-Propelled Windrowers in its operation; a brand new M155 mounted with a 20 foot (6.1 m) D65 draper header and an older 9352i SP Windrower equipped with an 18 foot (5.5 m) 972 header that were both modified for local growing conditions.

“Our new M155 was the first of its kind in the UK. We went to Agritechnica in Hanover, Germany, where we saw it for the first time and decided to import one through our local dealer, Ravenhill Ltd. It was very important for us to keep the local dealer involved.”

While Andrew says that he has always liked the performance of his MacDon® Windrowers in canola, what he has seen with the new M155 has really impressed him.

“Our rapeseed crops are very high and dense around here, and we sometimes struggled with our older windrowers getting enough clearance between the cut swath and the machine. However, with the bigger M155 we haven’t had a problem yet, and we can cut a lot more acres in a day with it. For our needs it’s far superior.”

Even though it’s taken a little getting used to, Andrew says that the M155’s DualDirection® feature means that they no longer have to use a loader to transport the windrower from field to field.

“A lot of the roads here are busy with traffic, and very narrow as well. The M155 with its reverse cart system and swivel cab is a massive step forward for us. When it’s time for us to move we just unhitch the header, pick up the weight box and then swing round the seat. We’re off down the road in five minutes.”

Having a windrower that cuts more and transports faster is critical for Andrew and his custom harvesting business, which seems to be more in demand than ever in recent years.

“About maybe 10 years ago a lot of people decided to move away from swathing their rapeseed and just going with desiccation because they were buying newer and bigger combines which could consume the crop faster when standing. Unfortunately, we do get a lot of wind in this area and some farmers that were using desiccation were losing 50%, 60%, even 70% of their crop in years when the wind blew strong. A lot of these farmers are now coming back to swathing.”

Finally, Andrew reports that his MacDon® machines help him achieve the most important thing in his business; the satisfaction of his customers.

“We always try to go back on all our jobs and see how the farmer is getting on. To go down the field swathing is one thing, but you always have to remember that there’s a guy who is going down there with a combine to pick it up after you. If we do a bad job laying down the swath, we don’t get invited back the next year. Our MacDon® machines help make sure we get invited back.” 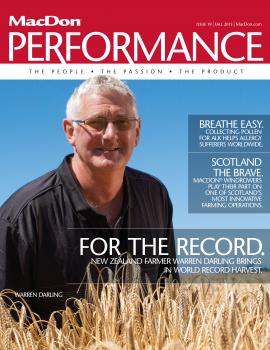 “It was our chance to show how grateful we are. ” Sixty-five years strong. It’s an age for many to hang up...

Products mentioned in this article: M Series SP Windrowers “You kind of have to go through a reverse thinking; how do we grow this weed...