Billy Garnett’s family run operation was one of the first in Kentucky to use the FlexDraper® and they’ve been reaping the benefits ever since.

The traditional methods can be found in the 350 acres (142 hectares) of tobacco Garnett grows in partnership with one of his nephews.

“Everything is still done by hand with our tobacco crop, from its planting through to its harvesting, drying and curing,” said Garnett. “To manage the tobacco portion of our operation we bring in about 70 migrant workers. It’s very labor intensive.”

The tobacco harvest on Garnett’s farm is a little bit like stepping back in time, as he still employs the same curing process that Kentucky farmers have been using for centuries.

“We grow both burley and dark varieties, which are mostly used for pipe, snuff and cigarette tobacco. All of it is cured in barns using traditional methods. The tobacco is hung from the ceiling and we build these sawdust and hardwood fires underneath to naturally dry and smoke the tobacco.”

The drying process, which can take over two weeks, gives the tobacco a  smokey flavor unique to Kentucky. For Garnett, the extra effort is worth it as tobacco can yield 10 to 20 times more profit per acre than corn and accounts for about 20% of the gross profit of their 20,000 acres (8094 hectares) operation.

In contrast to their tobacco business, the rest of Garnett’s operation is a study in modern efficiency. In partnership with his brother Phillip and nephew Kenneth, they grow a rotation of wheat, soybeans and corn in their fields back to back to back over a 12 month period. To keep yields as high as possible, timing between harvesting one crop and planting the next is critical and this is where MacDon has played an important role in the operation. In fact, it was the purchase of a 36’ MacDon 972 Harvest Header® back in 2001 that allowed them to commit to the wheat–bean–corn rotation in the first place.

“The grass was very wet with dew all over it, but the combine was able to take it in and keep going. Now that is something we just could not have done with a regular header.”

“Even though the wheat–bean rotation had historically made us more money, we were scared back then to raise that much wheat because we rarely could harvest it early enough to give our beans the best chance for a high yield.”

Garnett says that what held them back was the feeding ability of their combine heads.

“We have to harvest our wheat a bit green, but our combine back then couldn’t handle the moisture. I had been using stripper heads to handle the wet wheat, but the problem with that is having to buy another header. I knew the auger on the header was the problem and was even on the verge of buying an air reel, but then my nephew mentioned a draper header that he had seen working in rice country and about how well it fed.”

The header his nephew had seen was MacDon’s 972 Harvest Header and they soon found themselves with one on their farm to demo. It never left the farm.

“One memory from that first year with the header stands out. We had stopped for the day around maybe 9:00 or 10:00 p.m. and my nephew, who wanted to show off how well the header fed, took the combine over to cut some Johnson grass. The grass was very wet with dew all over it, but the combine was able to take it in and keep going. Now that is something we just could not have done with a regular header; we would only have gone 15 feet before the combine would have choked. I was really impressed by how well that header fed.”

Garnett believes that first 972 may have been the first MacDon header in the state.

Since that first year Garnett has remained loyal to MacDon headers, moving to FlexDrapers in 2007 and continuing to upgrade to the latest model as soon as they became available.
He credits MacDon headers with both changing the way they farm and for increasing their profitability.

“That 972 header instantly made us more profitable because we didn’t have to purchase as much equipment. Before it, I was using stripper heads for my wheat, a regular flex auger for my beans and a corn head for my corn. Now I just run MacDon heads and corn heads.”

“The biggest difference MacDon headers have made for us is that they have increased the productivity of our combines enough so that we can now harvest all of our wheat in time to get 100% of our fields planted in beans.”

Beyond being able to cut their wheat greener, Garnett says that the MacDon headers have increased the productivity of their combines by allowing them to harvest faster and cut wider with each pass, as well as cut longer each day.

“In the past we probably would have quit around 7:00 or 8:00 p.m., but now we try to run until midnight every night. Now we can’t successfully do that every night because it depends on how heavy the dew comes in, but we are able to do that probably 75% of the time.  We are able to run those extra hours because of these MacDon FlexDrapers.”

“We need to get the wheat off in a hurry because it’s critical to get our soybeans in the ground as early as possible to increase the likelihood of higher yields. We’re squeezing that window as much as we can and a couple of weeks makes a huge difference in the average yield that we realize.”

To maximize the time their soybeans have in the ground, Garnett runs their planting crews hot on the heels of the combines.

“My objective is to be planting directly behind them. I don’t need to be in the same field, but if I can follow the day after they pull out that’s perfect.”

Garnett says that being able to plant right behind the combines likely wouldn’t be possible without their MacDon headers.

“We can only do this because the combine is able to spread the straw out more evenly, a direct result of the draper feeding better. Of course combines have better choppers now, but no matter how good the chopper is, if the material is not fed evenly you can’t spread it as well. These MacDon headers do a wonderful job with that.“

When it comes time to harvest those beans, Garnett says that the FD1’s contribute even more to the operation’s profitability.

“If we have conditions where the crop is bedded down we can put the header down and have no trouble pulling in the crop.”

“Another important benefit of our FlexDrapers is how little shatter they give us. With our traditional auger flex heads my windshield and feeder house would just be covered with beans; we were losing that much. I can’t give you numbers, but our FlexDrapers have probably let us recover a bushel or two more an acre.”

He is also impressed by how low he can cut with the FD1’s.

“If we have conditions where the crop is bedded down, we can put the header down and have no trouble pulling in the crop; the header still feeds wonderfully. That’s been a huge improvement in harvestability for us.”

“I also like how little maintenance we have to do on the cutterbar. The last auger header that I had we had a lot of issues with the cutterbar, but I don’t have that with these MacDon FlexDrapers.”

For reasons like these, Garnett has remained loyal to MacDon headers over the years, but the benefits of that loyalty don’t just flow one way as MacDon itself has profited from Garnett’s quest for efficiency on their farm.

“Every other year MacDon is down here with some prototype to test with us. I guess they feel like we give them the opportunity and flexibility to run the product quite a bit on our combines. Of course, I enjoy seeing new products first, then we can get it incorporated into our operation quicker.”

One of the things that Garnett believes MacDon does a bit better than other manufacturers is providing farmers like him with access to information that helps him run their equipment at peak efficiency.

“With MacDon I find it easier to talk to people with knowledge about how to set up our equipment correctly for our conditions. It’s something that I wish all companies would do and I really appreciate that MacDon does it for us. They have been very helpful to us in that way.”

As much as he values this heightened level of assistance, Garnett admits that he needs it less and less in recent years thanks to the many advancements built into MacDon’s newest headers.

“MacDon’s new headers are more operator friendly and easier to adjust than ever. They are continually upgrading and improving them, and seem to be more willing to move to a next generation head, while other companies will try to stay with the same head a lot longer. I think that the size of their company keeps them flexible enough that they can do that to the benefit of farmers like me.” 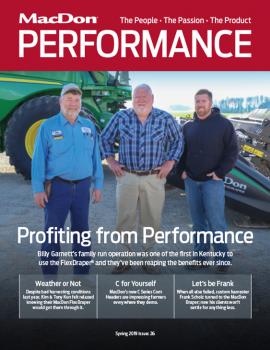 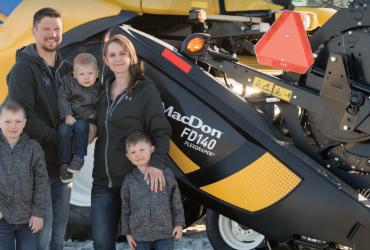 Good Morning, Since the end of harvest I've been meaning to send a note to thank you. My husband and I farm in... 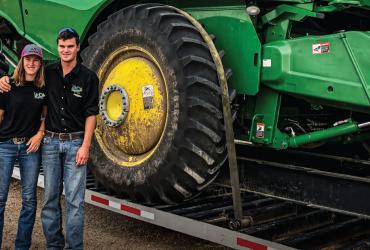