When researching his decision to purchase a MacDon FlexDraper®, Eric Wright found out it is the header of choice among the Custom Cutter community.

When Eric Wright of Wright’s Agriculture – a U.K based family farm and contracting business – was considering investing in MacDon FlexDrapers to amp up his harvesting capabilities, the first thing he did was turn to the internet to do some research.

He looked at the equipment that Custom Cutters most often used in the United States and Australia – two countries that make up much of the world’s harvest – and noticed one glaring similarity.

“They’ve got different colored combines on the back, but then all of them on the front have black (MacDon) headers,” he says. “So, if every custom combine is running these, that’s saying one thing.”

Initially Wright was skeptical of purchasing from a Canadian-based company with a parts warehouse in Germany and a limited dealer network, but it was a demonstration by MacDon that fully convinced Wright the MacDon FD135 FlexDraper was the right product for the job.

“We had an amazing demonstration from a MacDon FlexDraper; it was just a complete turning point in harvesting for us because where we'd struggled, we didn't realize how much we struggled until we put a FlexDraper on and it just made the whole operation effortless,” says Wright.

"We didn't realize how much we struggled until we put a FlexDraper® on and it just made the whole operation effortless."

“We were doing a good job, we were going quicker, the combine was always full, and we just couldn't believe the improvement in productivity by putting this on the front of the combine.”

And the customer service Wright experienced throughout the purchase process and beyond only further increased his belief and trust in MacDon and its products. He only has positive things to say about his interactions with the company and its staff as they guided him through the demonstration, purchase, and installation and was impressed by the knowledge base of everyone he encountered along the way.

“Right from sales all the way through service, everybody that you deal with has got experience with the products and you've got the confidence that if you have a problem -- and touch wood it's been amazing so far, we haven't needed any real support -- that we know there's the people and the parts available to us to get us back up and running and it's just been amazing to see that,” he says.

"Right from sales all the way through service, everybody that you deal with has got experience with the products and you've got the confidence..."

The addition of the FlexDraper to Wright’s fleet has made all the difference in the world for this past fall’s harvest, especially on uneven ground and in uneven weather. The header allows his team to start earlier and work longer without issue, and to push through conditions that would normally bring progress to a halt while the product’s flex-float technology helps the header glide across the fields without clogging the knives up.

Wright says the spring barley, in particular, has benefitted greatly by the use of the FlexDraper.

“But when we put the FlexDraper on, it just effortlessly hoovered it all up. We were travelling 3 km/h (2 mph) faster, we're picking it all up and we're getting another one of our big square bales to add to the acre as well which was just completely amazing."

“And we know that if we're coming up to some bad weather, if we wanted to run through the night we've got more chance of being able to do it with the MacDon FlexDraper than we would anything else that we've had before.”

Sustainable farming is a priority for Wright’s Agriculture, and the farming company has been an early adopter of techniques and organic products that work toward more environmentally friendly farming.

In 2018-19, Wright and his team started “Project Sheep,” which saw 250 acres (100 hectares) of budget cover crops sown and then grazed off by sheep. If the harvest results from the next spring barley crop are successful, more cover crops will be planted.

On the flip side, Wright's also has the facilities to store, dry and sell the grain they grow for their customers and take pride in their fleet of modern machinery and wide range of cultivation equipment and techniques that are used to “make the best of the unpredictable weather and ground conditions,” and that now includes the FD135.

Wright is still running some auger headers as well and says they are more limited in terms of when they can run and for how long. But the real difference between the auger and FlexDraper becomes especially apparent when they run alongside each other.

“When we've been running the MacDon and the auger head together, it's really noticeable in the straw row as to how the crops have been fed into the front of the machine,” says Wright.

“Our harvest used to be wheat and rape, it was easy, auger heads were not a problem... spring barley, spring oats, winter barley, all these crops, they are so difficult to get through an auger head, you need perfect conditions. The difference with the FlexDraper is that in less than perfect conditions you get a perfect result and awesome output.“

"...in less than perfect conditions you get a perfect result and awesome output."

The combine operators who work for Wright love the new headers, too. As Wright says, there was no hesitation and only “pure excitement” after seeing what the FlexDraper was able to accomplish during the previous harvest.

And even though the assumption would be that a 40-foot auger would be easier to handle than a 40-foot FlexDraper, Wright has found the MacDon “effortless” to use in any situation.

“The two operators on the MacDon FlexDraper were over the moon; not once have they ever said, ‘There's a problem with the header, it's not feeding well,' or, 'We've got to stop because it's not going in.' That has completely transformed and revolutionized this business in the sense that the header is now not the restriction factor of the harvest,” Wright says.

This past year proved to be a particularly challenging one in terms of the harvest. A higher-than-usual rainfall throughout the summer and into the fall brought many harvests to a complete standstill as soggy ground continued to get wetter.

Without the FlexDraper in his arsenal, Wright is confident he would have lost crop, as they would have been unable to pick it up off the floor or wouldn’t have been able to work as long or as hard on those few good-weather days.

Because of the FlexDraper, Wright was able to recover all of the crop, as well as the straw.

“We were looking at some of the flat crop fields and worrying about what we were going to do, but then you put the MacDon in there and once you've pulled out the field with the combine it looks like a perfectly stood crop that you've raised off the floor with nothing left behind. Nothing else we've tried was able to do that so consistently as the MacDon FlexDraper,” says Wright.

“I can't quantify the extra output and the extra crop that we've got that we would have lost on all these laid crops if we hadn't have had the MacDon,” he continues.

“The whole harvest goes so smoothly; where you're normally worried about what the header is doing holding the combine back, now it’s the combine that is the holdback, because it's got a constant feed and we've been able to make the most of these poor conditions with the FlexDraper.”

For Wright, using the MacDon FlexDraper has proved it’s not necessarily what’s behind the header that makes the most impact; the header itself is key, and now that he’s gone MacDon, he can’t imagine going back.

“It's so important, it's completely transformed the combine; how it performs, what we're able to deliver with it. I love coming to see how our operators are getting on in the day and seeing a perfectly shaped field that ourselves, our customers, we can all be proud of,” says Wright.

“And knowing you're able to get that extra productivity out of it as well and finish the block and get moved even if it's early hours of the morning, that to us means everything because it's keeping customers happy and just getting the harvest done as quickly and as efficiently as possible.” 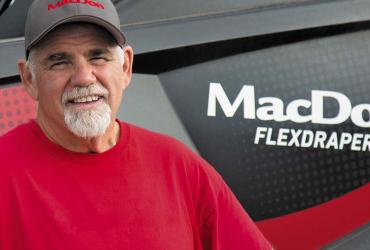 Just 90 minutes northeast of Toronto, Ontario’s Kawartha Lakes district with its 250 lakes and rivers offers a convenient escape from the congestion of Canada’s... 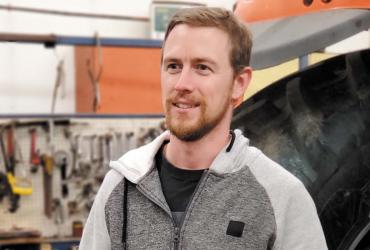 Sometimes the smallest thing can have the biggest impact on the course of one’s life. In the case of Design Engineer Andrew Bell,...