When Soren Jespersen did the math, his MacDon D60s came out the clear winner.

“We had fields that had 100 mm (3.9") of standing water, but we still drove through and harvested the grain.”

If you are a regular reader of Performance Magazine, you’ll have encountered more than a few producers who have experienced significant productivity gains from their MacDon equipment. In most cases their claims are based on solid observation and post-harvest assessments of the overall performance of their MacDon equipment. Rarely, however, have been based on rigorous side-by-side measurement against competitive equipment in the same field at the same time. But that is exactly what Soren Jespersen, Farm Manager for the Krenkerup Farm on the island of Lolland in the South Sealand region of Denmark, did before deciding to purchase their two 40' (12.2 m) D60 headers.

“When I go to the farm’s owner and say I would like to spend money on a new machine, I must have a good reason to do it,” said Jespersen. “So we do a lot of testing first. We must be able to show that the new machine can do it better and faster than the one we have now. Only then can we buy.”

Jespersen says that jump in capacity was very important in buying their D60s because, as a rule, they don’t like to operate their combines at higher speeds due to their challenging harvesting conditions.

“In other countries when they hear that we only drive 5 to 6 km/h (3.1 to 3.7 MPH) they say that’s not fast, but under Danish conditions it is fast. This is particularly true when our wheat or barley is lying down, and we have to cut very, very tight to the ground. When the crop is like that we have to slow down so that we can have a better cut and can feed the header better.”

Here, Jespersen says that the knife and cutterbar design, and smooth “heads first” crop feeding of MacDon draper headers provides a big advantage over traditional auger headers in their fields, allowing them to maximize the capacity of their combines better.

“With our other headers it was common to experience knife blockage when going through downed crop or places in the field where there is a bit of soil or some weed in the crop. When that happens you have to go slowly or stop and go back, and every time you go back you lose time and some grain. But with our MacDon drapers we didn’t have that problem. The smooth feeding of the header also lets you achieve higher capacity. You can hear the difference when the combine is being fed correctly.”

However, even though downed crop does not happen often, it is only one of several harvesting field challenges that they experience on the Krenkerup farm. Two others are stones and mud. Jespersen says that each year they spend about 1,000 man-hours picking loose stones from their fields, and then also take time to roll their fields after seeding. But mud can be an even bigger problem on an island where the highest point is only 82' (25 m) above sea level (Lolland is also known as “the Pancake Island” for its flatness). Last year was particularly bad for mud as Denmark experienced record rainfalls.

But as bad as the conditions were, Jespersen says that the D60s performed exceptionally well.

“Before our MacDon drapers, when we had wet conditions and were cutting close to the ground with a normal header, the header would bulldoze and get stuck. It could happen two, three or even four times an hour, and the operator had to stop and get out of the cab to remove the soil from the header. But with our MacDon headers we got stuck only three times all of last year. That’s just incredible given how bad it was.”

That kind of reduction of downtime during harvest is important for any operation, but especially so at Krenkerup where they work hard to maximize efficiency and productivity wherever possible. To that end they measure and analyze their operation from every angle, as well as employ the latest technologies and methods, all in an effort to maximize returns for their sizable operation. For example, Krenkerup has not only fully embraced precision farming methods, but they are also moving to the Controlled Traffic Farming (CTF) system which uses standardized machine widths to reduce soil compaction in their fields. In fact it was their application of CTF that was one of the main reasons they considered MacDon drapers for their combines.

“We are moving to a 12 m (39.4') CTF system. We have purchased a 12 m tilling machine and 12 m cultivators, but what we didn’t have was a 12 m header for our combine (which is equipped with tracks to reduce soil compaction). We couldn’t purchase a normal (auger) header in a 12 m width, so it was a reason to look at something else.”

According to Jespersen the move to a draper header was a pretty radical move in Denmark.

“We are one of the first farms to buy them. As many as 10 or 15 years ago I asked, ‘why don’t we have drapers in Europe?’ But there is a belief here that drapers won’t work because of all of the straw we have, five or six tonnes per hectare (1.9 or 2.2 tons per acre). But that never made sense to me because windrowers can run through anything.”

And he says that his experience with his MacDon D60s has proven his assumption right and he thinks that other European farms should follow suit. This is a view that he has enthusiastically shared with a group of farm managers that has met once a month since 1987.

“I said to them, as I’ve said to other farmers, that if you buy a big combine without a draper header you are wasting your money.”

And it seems that they are starting to listen thanks to Jespersen’s positive experience, as one of the group members has also made the leap to MacDon drapers.

“He went to his dealer and asked for two combines exactly like ours. The same machines, the same headers, everything exactly the same.” 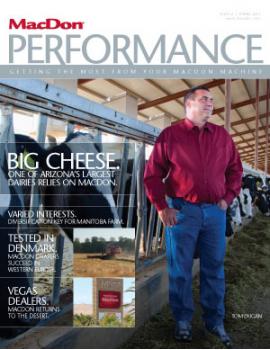 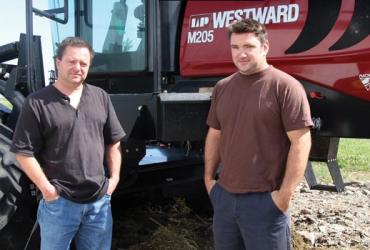 Products mentioned in this article: M Series SP Windrowers “This new cab makes the day a lot shorter – we can just keep on going because... 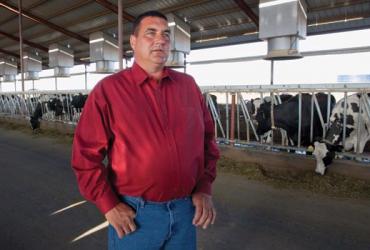