Join us as we take a sneak peak at MacDon’s new beefed-up rotary disc windrower.

“Our machines can’t just match what the others are doing, they have to exceed the competition.”

It seems like only yesterday that MacDon’s “next generation” M Series windrowers were released, setting new benchmarks for performance in several harvesting categories. In fact, many of these machines won coveted AE50 awards for agricultural innovation from the American Society of Agricultural and Biological Engineers. Now, before the competition has even had a chance to fully catch up, MacDon will soon release the first of its all new 5 Series machines; each machine in the series is designed to provide a significant upgrade over its current version and a leap forward in windrowing technology.

“As a specialist agricultural manufacturer, we can never rest on our laurels and let the rest of the industry catch up,” said Richard Kirkby, one of the team leaders on the 5 Series development team. “To remain competitive, our machines can’t just match what the others are doing, they have to exceed the competition in almost every category. That’s why MacDon invests so heavily in R&D – we have to lead to succeed.”

First out of the gate for the 5 Series will be MacDon’s high powered rotary disc SP windrower – the M205 SP with R85 Rotary Disc Header – and if any machine was ever created to lead, this is it.

Let’s start our tour of the machine with the M205’s all-new powerplant – a high powered Cummins turbo diesel engine (220 HP at a rated 2,340 RPM) that can automatically power boost to a whopping 230 HP when in extreme conditions. Powerful enough to run draper headers up to 40', this tier-3 engine is both fuel efficient and environment friendly. Owners can be confident that it meets the most stringent emission control requirements.

“Cutting with a rotary disc is a power intensive operation, especially if you’re working in heavy crop and wishing to maintain higher field speeds,” said Kirkby. “When setting out to design the M205 we wanted to make sure that the operator was never lacking power, and we achieved that with this engine, the heart of the machine.”

MacDon gave the M205 a completely redesigned air intake and exhaust system. This has resulted in a cosmetic reworking of the windrower’s body and hood to allow for greater airflow into the engine. To keep up, the air filter was also enlarged which has provided the added bonus of longer periods between service intervals.

The M205’s header drive system has also been rethought and reworked to ensure that every ounce of power being generated is effectively delivered to the header drive motor. The result is a simpler – more efficient – design with fewer working components that promises to be more constant, more dependable in tough cutting conditions. The header lift speed has even been increased thanks to a larger hydraulic pump.

The new M205 is not just all about muscle and power. It also has a softer side, thanks to MacDon’s new Ultra Glide™ Cab (UGC) suspension system. This four-corner “custom tuned” independent suspension system features suspension stabilization proprietary to MacDon to prevent cab roll. As such, operators can look forward to perhaps the smoothest ride they’ve ever experienced in a hay machine.

“Given the field speeds these machines are now able to cut at, cab suspension has now become a necessity for operator comfort,” said Kirkby.

Operators of the M205 will also appreciate the enhanced instrumentation that now provides accurate readout of hydraulic oil temperature, along with the reporting of more information on other critical systems.

Moving up front to the business end of the windrower, the new R85 Rotary Disc Header matches the M205 for performance upgrades. Here the focus has been to take the rotary disc concept to the next level by not only increasing productivity, especially in heavier material, but also ensure a cleaner, smoother cut in those extreme conditions.

”Productivity is definitely the name of the game with rotary discs, but productivity means nothing if you’re not also cutting clean,” said Neil Barnett, MacDon’s lead engineer on the R85 development team. “With the R85 we really wanted to push the envelope of what a rotary disc header can achieve. We wanted to make possible those high cutting speeds that operations need today, but we also didn’t want to sacrifice cutting quality.”

To achieve this goal, the engineering team completely revamped the design of the R80. For example, on the 16' model (the R85 is also available in a 13' version) they eliminated the multiple drum crop conveying system which tended to interfere with the header’s cutting ability in very heavy conditions. In its place they’ve added an overshot auger which delivers more positive feeding – and less back-feeding – of crop at the ends of the header when cutting heavier material. To help in lighter downed or lighter crop, the cutterbar assembly now sports a lower profile with full width wear protection. This enables lower, faster cutting.

“We also wanted to make the R85 more durable, as these types of headers can really undergo a lot of punishment,” said Barnett. “To do that we first set out to improve the unit’s overall integrity by using structural beam construction for the frame. We also reduced the number of drive elements by having one less belt drive on the 13' model and two less drives on the 16'. Less moving components, means less that can go wrong and more trouble free operation.”

MacDon’s engineers also gave the R85 an all-new feeding configuration to reduce crop build-up behind the drums. This is particularly beneficial when cutting partial passes. Finally, they improved conditioning by revamping the conditioner’s design so that it can feed crop more efficiently with lower power requirements. They also added a dual pitch auger to better distribute crop over the entire width of conditioner rolls, reducing the streaming effect from the cutterbar.

“I think anyone using a rotary disc machine today, regardless of brand, will see a big difference in overall performance when they finally have a chance to demo this machine,” said Barnett.

One person who has already had an opportunity to try out the R85 is Morgan Quick, the Operations Manager for the Peaks to Plains Hay Company out of Colorado. The company does custom cutting and baling in Idaho, Colorado and Montana, and cuts from 30,000 to 50,000 tons of hay a year. MacDon has been testing a prototype 16' R85 unit with them over the summer, and Performance Magazine caught up with Morgan Quick as his crew was working a job in Montana’s Gallatin Valley. Morgan Quick said that they were able to put close to 5,500 acres on the unit over the summer, or close to 300 hours.

“The R85 has as clean a cut as I’ve seen out of anything,” said Morgan Quick. “There is definitely less streaking, or scalloping, with the R85. That’s mostly a cosmetic thing, but still very important because, as custom operators, we want to be able to not only impress the people you are working for, but the neighbor as well so that maybe you can get their business.”

“It’s also no slouch for performance. We’ve cut some hay that was about chin high, probably three and a half or four tons to the acre at about 12 miles an hour. In comparison, before we owned a MacDon, in that type of hay our other unit would start to bog down at about nine miles per hour.”

Morgan Quick also reports that there is no longer any problem with plugging up behind the cages thanks to the addition of the larger diameter conveying drums (on the 13' size) that deliver smoother, more even feeding. He also likes the new lower cutterbar profile, which allows for cutting closer to the ground.

“It allows us to cut cleaner at a flatter angle. That’s a pretty big deal because we run in a lot of rocky conditions. But the thing that I was most impressed with on the R85 was that it makes a much smoother, more even windrow, even in light conditions now that the new auger has been added.”

Morgan Quick noted that working with a prototype unit hasn’t been without its glitches, something one would expect with a test machine. But those glitches have allowed him to meet some of the people behind the machine, and what he has seen he’s liked.

“I’ve been very impressed with MacDon. I’ve noticed that all of the guys who’ve been working with us on the R85 have a farm background. That’s a big deal. They’re really interested in seeing their machine succeed in our environment. They actually pay attention and they care. More important, they don’t shy away from the bad stuff. In fact it seems the more problems we have the better, so they can figure out what's not working and find a solution.”

Morgan Quick says that working with MacDon on the R85, as well as their dealings with MacDon regarding the four other MacDon rotaries they own (all M200 R80s) has been a revelation. 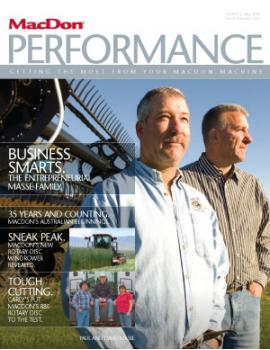 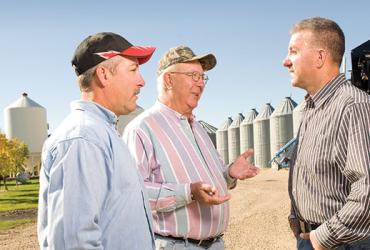 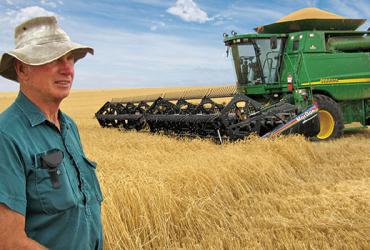 Cutting a swath through Australia