Christian Kirchner is one of many farmers from Europe making a go of it in North America.

“If you have a swather like the MacDon, it’s not hard to learn. You just go out there and swath.”

It’s a common theme across North America; as older generation farmers retire they often find no one in the family willing to take on the farm. Their land is then often bought up by larger operations, thus reducing the number of farmers, and rural population overall.

But in some regions that trend is being checked – at least in part – thanks to the immigration of a new generation of farmer from places like Europe. Enter Christian Kirchner, a member of this new breed who came to Canada from his native Germany in 2006. Kirchner grew up on a small farm in Bavaria but now operates a 2,700 acre (1092.7 hectare) operation near the small town of La Salle on the outskirts of Winnipeg, Manitoba. Kirchner says he first got a taste for Canadian farming when he came over to work a few summers when he was a student back around 2000 and 2001.

“I did it during my holidays,” recalls Kirchner. “I knew some Germans here, so I came over to work.”

The experience opened Kirchner’s eyes to the possibilities that Canada offers young, enterprising farmers. So when he was looking for a farm with his family, Canada came quickly to mind.

“One of the big advantages to Canada is the size of farm you can buy. You can grow easier here. Back home there is not much land available, and if there was any available the acres were few, at least in our area.”

Kirchner says that when he first arrived eight years ago there was much to learn, including practices such as swathing which they don’t do in Bavaria.

“It’s a little bit different farming here than in Germany. The first year you have to learn a lot, especially with the different machinery. But you learn it pretty fast.”

Kirchner plants grain and oilseeds on his land, rotating between staples like wheat, soybeans, oats and canola.

To harvest his crops, Kirchner relies on three pieces of MacDon machinery; a MacDon M155 windrower mounted with a 35’ (10.6 m) D65 Draper Header and a 40’ (12.2 m) FD75 FlexDraper® mounted on a New Holland CR9080 combine. He says he first learned about MacDon during his summer work as a student and has always appreciated the simplicity of MacDon’s equipment.

“If you have a swather like the MacDon, it’s not hard to learn. You just go out there and swath.”

Kirchner said that he started with MacDon, or MacDon built, machines in 2006, and bought his current equipment three years ago when his previous equipment became too small or too old for his needs.

So has he noticed a difference with this new generation of MacDon product? You bet he has.

“The M155 has more than enough power for that header. It performs really well in hard or really bad crop conditions. There is also no problem ever getting stuck; you can even go through water holes. It just has lots of power.”

He also appreciates the increased clearance of the M155, especially in big bushy crops like canola.

“On the old one I always had trouble going through it because the canola swath would actually touch the bottom of the swather. But that’s not a problem any more. In heavy canola the wider opening means that there is a lot more room for the canola to go through.”

Some of Kirchner’s land is actually within Winnipeg’s Perimeter Highway, a ring road that circles the city. This not only means that he has to travel a little farther when he is swathing, but he must also cross a couple of major highways. Here Kirchner says the M155’s DualDirection® feature, which allows the operator to reverse the driver’s seat in the cab and drive with engine forward, is something he values.

“It’s pretty good because it’s easier to steer that swather when you go backwards. You can also go a little bit faster.”

When it came time to specify a header for his New Holland CR9080, Kirchner says he was already leaning toward the MacDon product because of his swather experience, but what confirmed the decision was some neighborly advice.

“I already knew that I wanted to give the FD75 a try, but it was hard to make any other decision because my neighbours just kept telling me how happy they were with it.”

Now that he has had one harvest with the header, he says that he agrees with their assessment.

“I’m really happy with the product. It’s a great header. In my winter wheat, it was super easy to combine. But in soybeans it’s unbelievable how close to the ground you can cut. I’m able to follow the ground no matter what because of that floating adapter. I’m really impressed with that.”

“I also like how it feeds the combine more evenly than an auger header. It’s easier for the combine. You get more capacity out of it.”

Like other FD75 users, Kirchner says he has noticed that he is also recovering more crop.

Kirchner says that perhaps the biggest thing that he appreciates about his FD75 is its reliability. It seems that with his previous combine header by another manufacturer, it was always a question of whether or not he would be able to combine when the crop was ready.

“My other header cost me a few nerves, because I never knew when it might break down. But with my MacDon I haven’t had any breakdowns, it’s really reliable. Like I said before, it’s just a great product.” 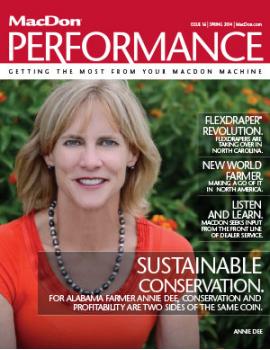 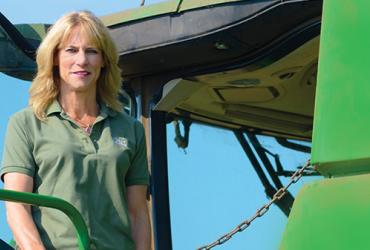 Products mentioned in this article: FD75 FlexDraper® Headers for Combine “Every opportunity to improve efficiency affects the bottom line and that affects sustainability.... 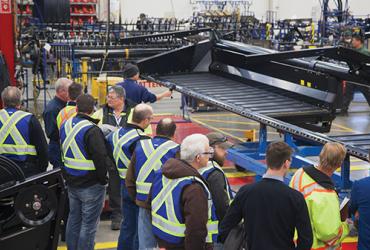 “I always thought that they had really good product and pride in what they did, and this trip just confirmed all that.” If you’ve...