All farmer Meinrad Kaelin wanted was a grain farm in Canada.

“When you do it like I did, you learn the latest methods and practices of producing.”

Growing up on a leased dairy farm near Egg, Switzerland, a small agricultural community just outside of Zurich, Meinrad Kaelin wanted something more for his life.

“It was always my dream to have a grain farm in Canada,” recalls Kaelin from his farm near Saint-Pascal-Baylon, Ontario. “I remember seeing a documentary of a Swiss family that had gone to Canada and all the nice land and machinery that they had. I just fell in love with that. Also, the farm papers were full of auctions for people who were selling their farms and moving to Canada. That just fueled my dream to get there and farm, even though I didn’t know if I could afford it because we had no land to sell.”

Then in the fall of 1993, still without any idea if his dream was possible, Kaelin took a three week tour of Ontario, Quebec and Manitoba with his wife, Therese, his brother, Edgar, and his 18 month old son Roman. Their objective was to see what types of farms were for sale. Surprisingly they actually found an affordable farm they liked in Ontario, but none of their immigration paperwork was in place so they had to let the opportunity pass. His dream was on hold, but not for long.

“In March of ‘94 a Swiss broker that was helping us called and said ‘I have two farms that will work for you.’ We came over almost immediately and my brother and I put an offer in on one of them.”

By the end of ‘94 Kaelin and his young family had moved to Canada to take up their new life on the farm they had bought near Saint-Albert; a 150 head dairy farm that was in need of an update.

In only three-and-a-half years the Kaelins were able to turn the farm around and sell it for a larger 300 head dairy. Still it wasn’t the grain farm that Kaelin had left Switzerland for, so in 2003 they decided to sell off the herd and their milk quota. With the profits Kaelin expanded the farm to its current 2,250 acres (910.5 hectares) and began farming soybeans, corn and wheat, while his brother purchased an adjoining property to begin another dairy independently. Kaelin says that knowing only the dairy business meant that he had much to learn, especially those first few years.

“It was a learning curve all along because we never grew crops in Switzerland, only hay.”

So he became an avid student of grain farming, attending seminars, talking to crop consultants and reading everything he could find. In the end, Kaelin says that not knowing much to begin with turned out to be an advantage.

“When you do it like I did, you learn the latest methods and practices of producing. There’s nothing to unlearn; you’re not trapped by tradition. Our farm is on the very northern edge for corn and soybean growing.

We don’t have a long window in the spring to plant, so there’s no fooling around.”

Kaelin’s inclination for non-traditional methods even extends to his choice of header for his 7120 Case Combine, a 35' (10.6 m) MacDon-built FlexDraper®. He recalls that most farmers in the area were doubtful that MacDon’s three-section flex concept would work as well as more conventional header designs when it was originally introduced.

“Everyone was skeptical at that time; me too. They said ‘it’s not a flex head, it’s solid.” But when I examined the concept and saw how its three sections followed the ground, I understood how it should work better, and it did.”

“What I like about MacDon’s concept is that it is a lot more simple than what the other companies have come out with. It has to be simple because if something breaks you have to be able to repair it in no time.”

“I think the MacDon-built FlexDraper® is phenomenal. I’ve never had a header like it – once it’s set up, you never have to touch it. It flows a lot better. The capacity is really good and it cuts really nice at high speeds. I have gone as fast as 6 MPH (9.7 km/h) and it doesn’t leave stubble a foot long like other headers at that kind of speed. The MacDon design is really superior for that.”
Another thing he likes about his header is that it eliminates the need for an air reel, something that was mandatory with other flex cutter bar concepts.

“We used to have to have those air reels. Sometimes at night you couldn’t see anything because of the dust in front of the combine, something that you don’t get with the FlexDraper®. The air reels are not needed because there is no auger and no dead triangle. You can harvest with the header all night long and it would never bunch up.”

Kaelin says that the only reason to stop harvesting for him now is because the beans are too damp. Even then, he can harvest earlier in the morning and later at night when cutting soybeans.

The other time saving feature of his header that he really likes is its slow-speed transport package, which allows him to detach the header and tow behind the combine when moving from field to field.

“Most people around here don’t have it, but I like it. It’s a lot easier to set the header down on both wheels than if you have to put it onto a header wagon. You just fold up your wheels. It only takes me two minutes to get it ready. It’s a real time saver for me.” 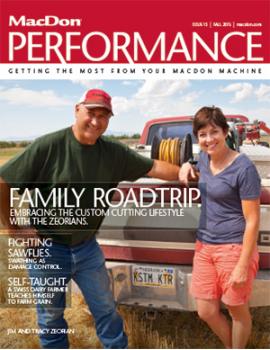 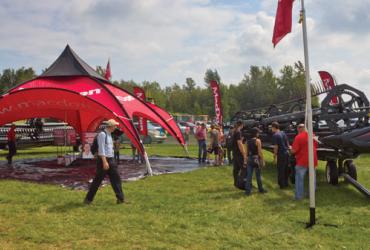 Out from the shadows

Products mentioned in this article: FD75 FlexDraper® Headers for Combine Visitors to two major farm shows in Ontario and Quebec, Canada, in 2013 witnessed something new –... 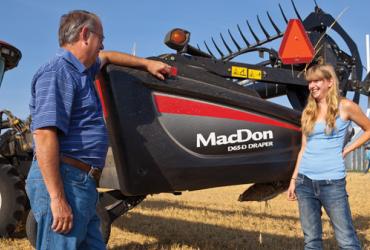 Products mentioned in this article: M Series SP Windrowers, D65 Windrower Draper Header “In a field that’s been damaged you can grab an armful...