It all adds up

“Spending less time harvesting means you’re putting less hours on your combine. If you can cut 25% of your hours off your harvesting at $300 or $400 an hour, it really adds up when it comes time to sell or trade in.”

Ron Small thinks big. While his Indiana neighbors are content with soybean harvests that yield the usual 50 to 60 bushels per acre (3.36 to 4.04 tonnes per hectare), Small has been playing mad-scientist with new cropping practices to test just how productive a soybean plant can get. Last year his best field weighed in at an incredible 127 bushels per acre (8.54 tonnes per hectare). That’s no small feat, but one that has become normal for Ron.

“Every year I get around 130 bushels on about 20% of my acreage, and around 85 or 90 with the rest of my beans,” said Small from his farm near Monroe City, in the southwestern part of Indiana. Here, Small crops about 5,000 acres (2023ha) of soybeans and corn, scattered around on about 200 different fields over a 15 mile (24km) radius.

To achieve his heavy-weight yields, Small has been working with a plant nutritionist and pursuing an aggressive course of foliar feeding. He starts with an application of a root enhancer in the spring, then follows up with a complex cocktail of sugars and ocean sourced nutrients applied over several sprayings. Small says it’s all part of giving the soybean crop the attention it deserves.

“I think the American farmer has mistreated the soybean plant because corn is the champion here in the Midwest. The soybean is a very fickle plant; it needs special treatment if you are going to get the best results.”

Small acknowledges that many farmers are rightly skeptical when they first hear of his yield claims, but says that a visit to his fields quickly erases all doubts.

“Not until they come and see my crop for themselves do they finally believe it. The yields don’t lie.”

As word has spread about his production, Small finds himself asked more and more to share his secrets with other farmers, something he is more than happy to do.

“I’ve been asked to go around and speak, but I tend not to go too far because you are not an expert unless you are within 50 miles (80km) of home. I tell them it’s very possible for other farmers to do what I have been doing. But the reaction I sometimes get is they’ll say we prefer to go about  it the old fashioned way – the way our grandfathers did it – or how their agronomist says to do it. They don’t want to be out in their fields spraying four or five times a season. But if you want to double your yields, that’s exactly what you have to do.”

Perhaps even more remarkable than the volume of Small’s soybean yields, is that he is achieving these numbers at the age of 80, a time in life when most farmers are content to putter around the machine shop and leave the heavy work to others.

“I’ll never quit farming until the good lord decides to take me. It’s a very pleasant thing to be doing. Each day you can look back over the day and say look what I accomplished.”

A fourth generation farmer of English-German stock, Small says that he didn’t commit to being a farmer full-time until he was almost 30 years old. After graduating as a mechanical engineer from Purdue in 1961, he then taught high-school math and physics in Monroe City for several years, which allowed him to continue helping out his dad on the family farm. During this time he also put his mechanical engineering degree to use taking a lot of product consulting jobs, most notably with one of the world’s largest full-line ag equipment manufacturers, a role that he continues to this day with the same company.

“I have a good relationship with their product engineers. We get along because they know that I will tell them the truth. I’d hate for someone to beat around the bush and not really tell me what’s wrong with a piece of equipment. Besides, I know my answers are mostly right, I have enough confidence in myself to know that.”

Small admits that there was a little friction with the manufacturer back in 2004 when he decided to abandon their flex head for MacDon’s all-new FlexDraper® concept.

“When I first saw the FlexDraper® I said ‘now there’s a company that knows what they are doing with heads.’ I instantly saw that the FlexDraper’s three part frame was the secret of expanding the width of a flex head beyond 35’(10.7m) and still be able to hug the ground, especially in soybeans.”

“Of course the manufacturer I was working with didn’t like it very much when I purchased that first FlexDraper® to go on their combine. But I said to them, ‘a farmer has to go with the machine that gets him the best results, so you had better get on the ball; change now before others get ahead of you, because they will stay ahead of you.’ Well MacDon has done that in the manufacturing of heads.”

Small considers himself fortunate to be alive at this time in the history of agriculture, when tools like the FlexDraper® are available to the farmer.

“I have lived during the best years of agricultural development. The advances that are occurring now have been greater than at any time in our history. Every piece of machinery that I use today has really changed in the last 15 years, and I think that MacDon’s FlexDraper® is the most tremendous of them all; the most important advance made by any header for the harvesting of grain ever.”

“Think of what the FlexDraper® has meant to production. Now with MacDon’s 45’ (13.7m) head a farmer can easily do 200 acres (81ha) a day with a single combine. Well back 20 years ago it would take four machines to do the same work.”

Small recalls when MacDon was first considering building a 45’ (13.7m) header, MacDon contacted him to ask if he could use a header that wide, even though they were concerned it might not work on his land.

“They said that they thought my ground was a little too rough for 45’ (13.7m). But I said ‘no I don’t think so, let me take one of them and I can show you.’ After I took delivery, they came out to see the job I was doing with it and they couldn’t believe how well it worked in these conditions.”

He says that even though he knew the 45’ (13.7m) would perform, even he was a little surprised how easy the adjustment to a wider head was.

Beyond ease of handling, Small says that there are many other things that make Flexdrapers incredibly productive headers for farmers.

“The quality of the cut is as good or better than any machine that I’ve ever used, even those machines with a narrower width. And, unlike competitive flex heads where the auger jumps up and down and flexes with the heat of the day causing you to constantly break fingers, I never break any fingers with my MacDon.”

“You can also run a lot wetter material through it, like when the dew is on in the morning. That’s really important in soybeans because you can start an hour earlier than with an auger machine, which would choke the combine if you tried to harvest something that wet. And then in the evenings you can run an extra two hours, so you gain at least three more hours during the day.”

“Best of all, you can go a lot faster with a draper head and cover up to 50% more ground in a day and still do a better job than you can with an auger head.”

Perhaps more important than performance is the impact a FlexDraper® can make on a farm’s economics in two key areas: crop recovery and combine resale value.

“The auger itself is the crop loss culprit in an auger head. When a standing bean plant hits that auger the metal from that auger hits the pod and knocks those beans out. The reel then picks them up and either throws them into the combine or over the header onto the ground to be lost forever. With a FlexDraper® they come in and the reel gently touches them and throws them on the belt to be carried into the combine. There is nothing to shatter the bean before it gets into the combine, and therefore you save it.”

He says that the other big economic gain is a side benefit of being able to harvest significantly faster.

“Spending less time harvesting means your putting less hours on your combine. If you can cut 25% of your hours off you’re harvesting at $300 or $400 an hour, it really adds up when it comes time to sell or trade in. And, besides that, a farmer doesn’t want to spend all his time out there in a combine. It sounds like fun but, hey, we’ve got other things we need to be doing.”

Looking to the future, Small would like to see MacDon continue to push the envelope of header design. He thinks that as impressive as the results of his experiments in plant nutrition have been, that there still remains potential for even more gains.

“I have found that my FlexDrapers can take my 130 bushel beans, but if I go ahead and increase my yield another 50 or 60 bushels – which I think is possible – then I’ll probably start having some issues. I would like MacDon to start working on something that can handle even those kind of loads.” 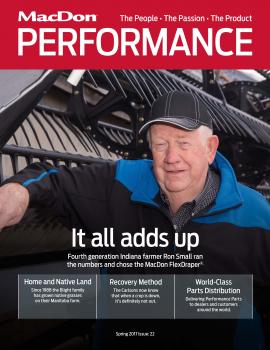 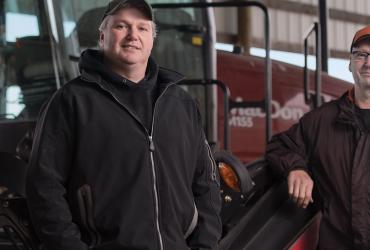 Products mentioned in this article: “Native grasses shatter very readily on the head so we try to be as gentle as possible with the swather,... 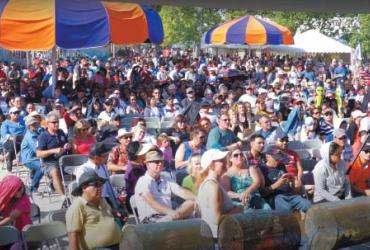