When it comes to harvesting, width is more important than combine class for Saskatchewan farmer Jeff Hoiness

Products mentioned in this article:

Upgrading to a larger combine; this is the straight-line solution for many farmers needing an increase in harvesting productivity. But is going up in combine class always the best option? Not if you are Jeff Hoiness (pronounced highness) who, along with many other fellow Saskatchewan farmers have decided that a better solution is to upgrade their current combine’s header for something wider.

“In our area there’s more of a push to putting bigger heads on class eight combines versus buying class nine combines with big heads,” said Hoiness from his farm near Allan, Saskatchewan, about 30 miles (48 km) southeast of Saskatoon. “It’s simply a matter of cost; it’s less expensive to add a 20% wider header than buy a 20% bigger combine.”

And for Hoiness, like many of his neighbors, the wide header of choice is a MacDon® FlexDraper®. It is a preference Hoiness says was confirmed in 2009 when he was able to reduce the number of required headers on his two combines (JD 9660 & 9760) from three to two by swapping an older 974 FlexDraper, a competitive auger flex header and a competitive rigid header for two new 35’ (10.7 m) MacDon FlexDrapers. Not only did he save on the capital costs of the third header, he says he experienced an immediate increase in productivity.

“Overall we’ve noticed at least a 15% productivity boost using MacDon FlexDrapers over competitive headers in most conditions, and that would be on the low side. In lodged conditions it could be upwards of a 50% productivity increase. For example, we’re now able to harvest lodged crops at about 4 mph (6.4 km/h), while before with our previous auger heads we would be lucky to go 2 mph (3.2 km/h), or not even harvest at all.”

Hoiness crops approximately 10,500 acres (4,249 hectares) with his brother Darren, one full time employee and two to three seasonal employees (Jeff’s son Dalyn plans to join them after finishing his studies in Ag Business). They grow a mix of wheat, barley, canola, peas and lentils with the canola and cereals accounting for about 80-90% of their acres and pulses making up the balance.

“Being able to cut all of our crops with just one header is one of the top checkmarks in our purchase decision. Not only does it save us the cost of the extra header, it’s also nice not to worry about switching heads when you’re going from one crop to another, or if the weather changes.”

Initially, Hoiness was doubtful that he could run a 35’ (10.7 m) wide header on his land which he describes as “definitely not flat.”

Beyond the FlexDraper’s unique three section flexible frame, Hoiness points out that a key feature of the FlexDraper which permits them to run a wider header is the exceptional flotation. “The inability of flex augers to float in rolling conditions is where they don’t measure up to the MacDons. If you think that your topography won’t manage anything larger than a 30’ (9.1m) flexhead, I can tell you from my own experience that it will with a FlexDraper.”

Hoiness says that another advantage of FlexDrapers over traditional flex augers is MacDon’s C-shaped cutterbar.

“In lodged conditions the C-shaped cutterbar just allows us to get literally every bit of the crop easily. With other headers we’d have to slow down quite a bit and we still wouldn’t get it all.”

“Also, we have a lot of rocks and we have found the FD Series better in rocky conditions than our competitive flex head was. The rocks tend to stay either on the knife or in the area in front of the center draper behind the knife. As such they don’t enter the combine as often and that means less stoppages and less damage.”

Hoiness reports that the even feeding characteristics of the FlexDraper not only lets their combines handle larger volumes of crop, it also lets them harvest later into the day.

“In good harvesting conditions my belief is that all headers work fairly well. It’s when conditions get less ideal that the MacDons shine. For example, auger headers want to wrap when crops get tough as you cut into the evening when moisture rises, but MacDons just continue to feed the combine well. I would say that FlexDrapers with a double knife drive will allow you to cut as late into the evening as you want to go.”

With so many advantages, Hoiness says that it was a “no brainer” to purchase another FlexDraper when they added a third combine to the farm back in 2010. In fact, they continue to run that header along with their two 2009 edition FlexDrapers, even though they have since purchased three new John Deere S680 combines. Hoiness explains that the fact that they swath some of their crops, along with the renowned longevity of MacDon products, has allowed them to continue with the same headers.

“We really like the durability of MacDon headers; they’re built to last. As long as you change the knives and guards, and perform proper maintenance, these headers will serve you a long time.”

For other farmers considering the FlexDraper for their operations, Hoiness says that he believes his experience with the product isn’t unique; he is convinced that the increased productivity, flexibility and durability that his operation has realized since switching over to MacDon FlexDrapers should be easily replicated by other producers.

“If anyone is looking to increase their harvesting productivity, a MacDon FlexDraper should be one of the first things that they look at. The economics really work if you can replace a flex auger head and rigid draper head with a single FlexDraper. The bottom line is you will get maximum efficiency out of your combine by adding this header.” 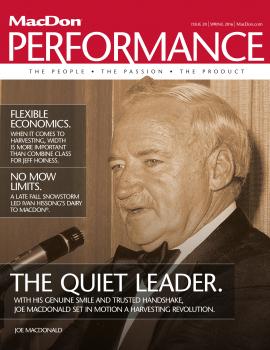 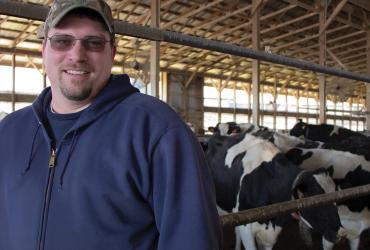 Products mentioned in this article: R1 Series Pull-Type It’s funny how life is. We can persist using the same brand of product for... 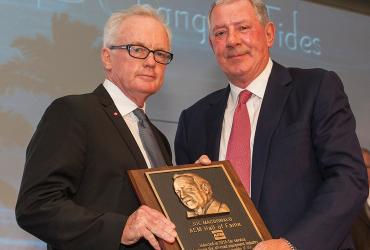 With family and friends in attendance, MacDon founder Joseph Andrew MacDonald (1924–1991) was inducted posthumously into the Association of Equipment Manufacturers (AEM) Hall of Fame, November ...