MacDon’s relationship with South American farmers is just starting to take off.

“Working with this header is like fishing – you work relaxed. The header does not give you any trouble…”

You probably already know that the United States leads world soybean production, weighing in with just over 91 million metric tons harvested in 2009/10. But hands up if you know which country is in second. If you said Brazil you’d be right; at almost 55 million metric tons produced, Brazil comes in second in production, but ranks first in soybean exports. In fact, South America as a whole accounts for 51% of the world’s soybeans, (North America is only 36%), with Brazil, Argentina and Paraguay being the top three producers.

So it’s only natural that if you manufacture one of the world’s best soybean headers – MacDon’s FD70 FlexDraper® – that you’d want to introduce your product to the world’s largest market.

“We first started to sell FD70s into South America in 2008,” said Bruce Nesbit, Export Manager for MacDon. “The conditions in South America are perfect for the FD70. Just the fact that there are so many soybeans being harvested, and the FD70 has distinguished itself so well in this crop already in North America, indicates that there is great potential for this product.”

That potential is driven by what Nesbit says are some distinct advantages the FD70 brings to farmers in countries like Brazil and Argentina – the biggest being the fuel savings the header can bring to the producer. Because producers can move up in width by up to 10' (3 m) when moving from a flexible auger platform to a FlexDraper® and still travel at the same field speed, the fuel savings can be dramatic.

“These days, worldwide, there’s more and more of a focus on fuel consumption, and that’s only going to become bigger as prices continue to rise. In Brazil, there are no railroads like here (in Canada). They truck soybeans for thousands of kilometers, up to 3,000 miles (5000 kilometers) to get to port.”

Brazil’s hefty transportation costs means that producers have to be extra diligent reducing costs when harvesting to stay competitive.

“When a farmer moves from an auger to a FlexDraper® there is definitely a fuel savings. Operators commonly say that they can just feel that the machine’s smoother.”

One farmer who has experienced this first hand is Rangel Dallazen of Dallazen Seeds in Palmeira das Missões City, Brazil. Son of one of the company’s owners, Dallazen helps manage an 8,600 acre (3,500 hectare) farm that grows soybeans, corn and wheat.

“The FD70 increases the combine’s performance, efficiency and fuel economy,” said Dallazen. “Compared to other headers it also has perfect feeding, and that means greater threshing efficiency for the combine.”

Dallazen also says he has been impressed by the FD70’s ground hugging cutting action, another of the advantages the FD70 provides farmers.

“Our 35' (10.7 m) FD70 harvests really well compared to other auger headers in all types of ground – flat, hilly, bumpy, going up hill and going down hill. It even harvests better than our smaller 19' (5.8 m) and 23' (7.0 m) auger headers. Because of the way it articulates, the header perfectly copies the ground.”

Dallazen also says that his crews appreciate the FD70’s robust in-field performance, especially its flotation which responds quickly to ground changes and obstacles.

“Working with this header is like fishing – you work relaxed. The header does not give you any trouble, you can just keep on working and working.”

Another South American who has also been very impressed with the difference the FD70 has made for his operation is Ignacio Machado Persez who runs Agroservicios del Litoral Company, a custom cutting service out of Paysandu, Uruguay.

He says that he and his partner Rafael Duran tested the waters two years ago with three FD70s to see if the headers could really boost their productivity, admitting that both of them were initially skeptical that something as wide as 40' (12.2 m) wouldn’t give them trouble. Proof that the test went well can be found in the fact that Persez and Duran will have no less than seven FD70s at work in their operation by the time this article goes to print.

“In one year we harvest between 11,860 and 12,350 acres (4,800 to 5,000 hectares) per draper header,” said Persez. We alternate wheat crops with soybean crops, so we now have two soybean and two wheat seasons experience with the FD70. Their performance has been good, truly very good.”

“The header’s efficiency is incredible because of its even feeding, regardless of the crop condition. Its cutting action is highly superior to that of a conventional header, and having the ability to make adjustments with the cutterbar angle and reel just makes it that much better.

Persez says that beyond boosting combine efficiency, the FD70s have also provided two other significant benefits – longer work days and a large increase in the amount of beans recovered.

“One of the most important advantages our FD70 gives us is the ability to start to cut one hour earlier in the morning and work one hour later in the evening. We tend to harvest our soybeans with green stems and dry pods sometimes due to the very wet harvesting conditions here in Uruguay. This can be very challenging for a conventional auger header, but not for the FD70.”

“We’ve also noticed that the FD70 is much less damaging to the bean pods, something the farmers we work for really appreciate. We haven’t measured exactly how many more beans we are recovering because of this, but I would estimate it is around 15% to 20%.”

According to Bruce Nesbit, the results Persez’s and Dallazen’s companies are enjoying are being replicated just about everywhere the FD70 is being put to work in South America, a continent that is rapidly becoming an agricultural superpower.

“Last year I was at an agricultural show in Brazil and people were talking about drapers as the thing of the future. This year they’re not the future, they’re the present – everyone seems to know about them and want them.”

But for all of the positive results so far, Nesbit says that MacDon realizes more needs to be done to make sure that the FD70 is doing all it can for South America’s farmers.

“We’re learning as much as we can about each different area – what the challenges are, what their needs are.”

“Operators are used to the plug and play of auger headers. We’re working to make our machines easier to set up and operate in this plug and play environment. We’re also developing better instructional materials in Portuguese and Spanish to ensure that farmers understand how to set up the header correctly for optimal performance.”

MacDon is also working quickly to further develop both its distribution and service networks throughout the continent, which is important given some of the vast distances involved between dealer and field. Companies like GTS do Brasil in Brazil, Ciabay in Paraguay, Interagrovial  and Corporacion de Maquinaria in Uruguay and Suagri and Franco Fabril in Argentina have already taken on the FD70, and that list is only expected to grow in the near future.

“The FD70 concept is skyrocketing even faster than we thought it would,” admits Nesbit. 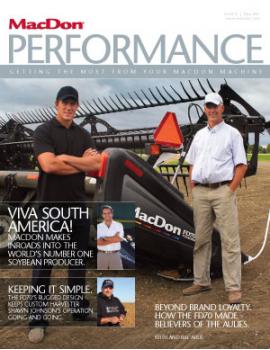 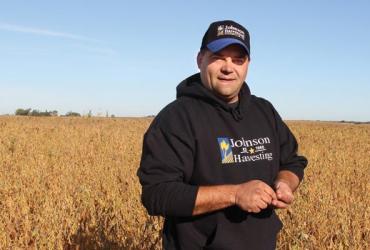 Products mentioned in this article: FD75 FlexDraper® Headers for Combine “We can always start a good half hour to an hour earlier in the morning... 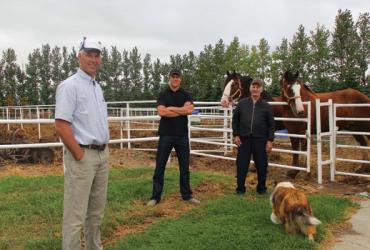 A Tale of Two Headers

Products mentioned in this article: FD75 FlexDraper® Headers for Combine When Bill Aulie and his son Keith purchased a new Case IH 8120 two years ago...