With 10,000 acres of unforgiving land to harvest, Brett Fisher doesn’t have time to mess around.

There’s no substitute for real-world field trials when you’re building equipment designed to thrive in some of the planet’s most demanding harvesting conditions. That’s why when MacDon’s FD2 FlexDraper® was being put through its final paces before entering full production, MacDon challenged it with a gruelling world tour. One of those countries was Australia, and one of the headers received was a 50-footer (15.2 m) FD2 that found a home in the northern reaches of the state of Victoria.

The recipient of the FD250 FlexDraper was Brett Fisher, who took delivery of the unit in November of 2020 while he was in mid-harvest. From MacDon’s perspective, this was an ideal placement for the header, as Fisher’s almost 10,000-acre (4047 hectares) farm would qualify as one of the more extreme dry land settings in which its next generation header could be tested. This is arid country where the annual rainfall is posted at around 14-inch (35.5 cm) but the on-the-ground reality is something more variable, as evidenced by two in-name-only lakes that border Fisher’s land.

“One I’ve only seen water in it a couple of times in my life, and the other one dried up in 2015 and has been dry ever since,” said 43-yearold Fisher who’s been farming this land since he was 17.

“Our climate is such that we can get rain in one spot and not in others. For example, last year a quarter of our farm had the best year it has ever had and the rest of the farm was only average to a little bit better than average.”

To cope with the inconsistencies of nature, Fisher’s land is strategically spread out over a much larger area than most similar sized farms.

“From one end of our farm to the other it's about 60 kilometres (37 miles), with our land split up into four growing areas of a minimum 2,000 acres (809 hectares) each. Because our rainfall varies so much, having our fields spread out makes it work because it lowers our risk.”

One of nature’s risks not countered by the expanded farm comes in the form of two unusual crop pests that infiltrate Fisher’s land from two nearby nature reserves.

“We have a lot of trouble with kangaroos and emus. The emus are the most destructive because they eat and trample the crop. I’ve seen 80 to 100 of them running through our canola just as it's ready to be harvested; they just shatter the canola and make a hell of a mess.”

Fisher says that farming over such a wide area means that the ground conditions he faces are as variable as the rainfall. “We have a big mix of country; a lot of up and down hills and land with little cracks in the soil where the water lays. Our soil goes from a light sandy beach kind of country to some real heavy land, so we have to figure out the best crop for the land and soil type.”

As you may have expected, Fisher grows several different crops including vetch (a high protein animal feed), oaten hay (for export), wheat, barley, canola, lentils, field peas, fava beans and lupins. Of course, this wide range of crops combined with Fisher’s challenging landscape and variable climate only underscores why MacDon was pleased to have Fisher put their next generation header to the test. For Fisher, the FD2’s 50-foot width represented the missing piece of a puzzle that he had been assembling for a while, and the primary reason he jumped at the chance to run the FD250.

“We’ve been moving our farm over to 50-foot controlled traffic over the last four or five years so we’ve been updating machinery such as our spreader and air seeder. The last piece we were looking for was a 50-foot front (header) for our combine.”

Needless to say, Fisher was anxious to get the FD250 on his farm. He says that the first thing he noticed about the header was how sharp it looked.

“The initial look of it sort of blows you out of the water because it’s well finished off and the aluminum in the frame makes it look stylish. Overall, it looks like a strong, heavy built front and its 50-foot size makes it seem huge.”

And while it is said that looks are only skin deep, Fisher reports that the FD2’s performance more than lived up to the expectation created by its appearance. The first crop he was able to put it to work in was his lentils, which were also being cut by a hired contractor. This gave him an excellent side-by-side demonstration of the next generation header’s capabilities.

“Our contractor runs a New Holland CR9 series combine with a 40-foot FD1, so we were up against that. Our legumes last year were probably as good as we can grow around here, and the FD2 definitely outperformed the FD1.”

Fisher admits that he was initially worried with the way the FD2’s cutterbar was set up as it appeared to have a higher lift than what he is used to, but those concerns quickly dissipated after seeing the unit cutting.

“The biggest improvement with the FD2 I reckon was when we were on the ground; the header just follows the cutterbar so well now thanks to the triple reel. The reel matches up with where the front flexes, so you don’t have any gap at all between the cutterbar and the reel. You really notice it when the header is going over undulating country because the header feeds unbelievably.”

The third reel is a new feature to MacDon FlexDrapers (optional on 40-foot and standard on 45 and 50-foot FD2 models) and guarantees a consistent reel to cutterbar relationship across the entire header, even when the header is under extreme flex, which can be up to 70% more than MacDon’s FD1.

“We also noticed the third reel when we were direct cutting our canola. In the past we sometimes had trouble with a two-reel system in the middle where the arms could restrict crop coming into the feeder house, but with the three reel system there is nothing to stop the crop; everything just flows a lot better.”

Fisher also says that he noticed a huge capacity jump with the FD2, so much so he now regrets not having purchased a larger class combine in 2020.

“In the cereals it was a bit hard to tell any speed difference because we found that the combine was now the restriction. When we bought the combine, we went with a John Deere S770 because we thought we could only get a 45-foot front but should have gotten something bigger now that we have this 50-footer.”

“In terms of the evenness of the cut, the difference is huge. This last harvest we also ran another brand’s 40-foot rigid draper header in our cereals and you could definitely see which header had cut where. The FD2 delivered an even 10-inch cut right across the field, but where the other header had cut it was 10-inch in some places, 8 in others. Consistency like that gives you confidence that when you go back in with the seeder that you’ll be able to get through it well.”

Overall, Fisher was able to put about 200 harvesting hours on his FD2, giving him a good sense of what his harvests will be like going forward. One of the things that really struck him was how the header’s third reel and deeper deck combined to make his overall harvesting experience more enjoyable.

“It actually blew our minds with how much it made harvesting less stressful. The deeper deck and the fact that you haven’t got the arm in the middle lets you see the whole front that much better. When you are running the front on the ground all day cutting lentils, and you spend your whole time looking at the cutterbar it can get quite tiring. It was amazing to see how much the FD2 made your day much easier compared to what it used to be like. When you have confidence in the front and the job it is doing you can really sit back and relax.”

Just as remarkable for Fisher was how well the header ran without issues throughout the harvest, especially because apart from when the header was delivered and one other visit from his MacDon rep, he ran it without needing any assistance from MacDon.

“When we initially took it on, they said that there would be some MacDon engineers coming out to get it set up properly, make alterations and monitor its performance. But because of COVID the engineers weren’t able to come. But it didn’t matter because it all worked out. We just hooked the front up, put it on the ground and started cutting. It worked perfectly straight away.”

“Normally when you buy new machinery you always expect some teething issues; you definitely don’t expect a machine to perform as well as the FD2 did. In fact, everything worked so well that after three weeks working with it the MacDon rep asked us what we would improve on it and I couldn’t actually think of anything. I tried to find fault with it, but honestly couldn’t think of one thing I would improve.”

It turns out that it wasn’t only Fisher who was impressed with the FD2. Once word got out that he was running the 50-foot FD2, friends and neighbours started turning up to give it a run.

“Everyone who hopped on it was blown away with how it performed and even how it looks. They couldn’t believe the job it was doing or the pace it was doing it at. I reckon that if you brought 20 of these headers into Australia tomorrow you could sell them in this area alone. Even the contractor who helps me out is pushing hard to get one for next season after seeing what it can do.” 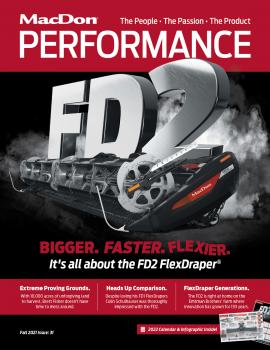 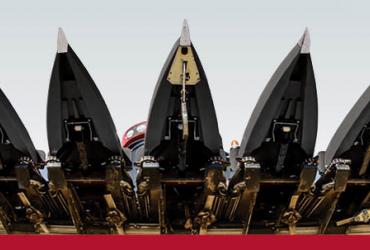 Residue, Let’s Break it Down! As grain yields continue to improve, stalk strength continues to increase, and tillage practises change; it has become... 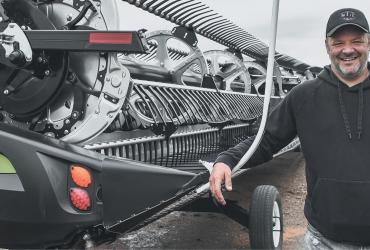 It’s a given that you are going to have a little pioneer in your blood if you’re a fourth-generation farmer still...