Officially designated by the British Government as an Area of Outstanding Natural Beauty, the well touristed Cotswolds are renowned for being home to scenic pastoral landscapes, storybook villages and the quintessential English Charm that rural Britain is famous for. The region has always been linked to sheep production and it was prosperity from the wool trade that gave rise to large, privately owned estates where tenant farmers and laborers worked on behalf of the land’s owner. With the waning of the Industrial Revolution, many of these estates were broken up and sold off, but some still remain. One such estate is Overbury, a sprawling mixed farm that is located on the western edge of the Cotswolds.

Now, one might be forgiven for anticipating Overbury to be a place locked in time and beholden to traditional practices, especially given that the estate has been owned by the same family since 1722. Instead, Overbury is likely one of Britain’s most progressive operations as it is just one of 40 LEAF (Linking Environment and Farming) Demonstration Farms in the UK. As the leading organization for sustainable agriculture in Britain, LEAF and its member farms are working hard on figuring out how to continue supplying the planet’s growing population with quality food, all the while protecting the environment, human health and the profitability of farmers.

“The LEAF approach is basically looking at your business holistically to try to reduce the impact on the environment, while also making a bit more money,” said Jake Freestone, Overbury’s Farm Manager. “In addition to being environmentally responsible, it is quite a good guide for planning your business and making day to day decisions.”

Over and above managing the farm according to LEAF principals, being a LEAF Demonstration Farm carries with it additional responsibilities for Freestone and his team of five.

“We’re not only trying to demonstrate best agricultural practice to the industry, but we are also working to help educate consumers as well. We host lots of farm walk-arounds for farmers wanting to look at what we are doing as well as open days for the general public.”

Last year Overbury’s annual “lambing day” attracted upwards of 800 people to the farm alone, one of two big open days that the farm holds each year. In addition to working with his team to host hundreds of visitors a year, Freestone helps spread the word about sustainable farming through the farm’s website (overburyfarms.co.uk), his personal blog (farmerjakef.blogspot.ca), Facebook (facebook.com/overburyenterprises) and YouTube where you will find more than 400 of his videos covering all aspects of Overbury’s operation.

Freestone says that although estates like Overbury were once common in the UK, it is quite unique today.

“We are now just under 5000 acres (2023 ha) total, with the in-house farming a bit just under 4000 acres (1619 ha), and the rest designated woodland or tenetted out to other farmers including a stud farm. Overbury also has a farm contracting business and about 130 or so residential properties in two small villages with about 300 people living here. All but three houses are owned by the estate.”

Overbury’s mixed farm is comprised of grazing land for the farm’s 1,200 sheep and about 950 hectares (2348 acres) of combinable crops such as winter wheat, canola, winter and spring barley (grown under contract for Molson Coors), linseed flax, soybeans and peas. Vegetables are also grown on the estate, but these are managed by a third party.

“Being a LEAF designated farm boils down to three elements: economic, social and environmental, and what can we do to try to improve each of those three aspects on our farm through an integrated farming approach. If you look on the LEAF website there are nine different sections to integrated farming including soil management and fertility, crop health and protection, pollution control, energy efficiency and nature and landscape conservation.”

“Water management is also very important and one of the earliest and easiest things we did was buffering all of our streams with a six meter (20') grass strip which acts as a physical barrier to any sort of runoff. These buffering strips hold the soil plus also stop nutrients, fertilizer and spray drift from impacting a water course.”

Freestone reports that one of the most economically important –and environmentally impactful– changes that they’ve made to their farming under LEAF was moving to no-till farming in 2015.

“With no-till our crop establishment costs have gone from about £130 ($180 USD) per hectare to about £60 ($83 USD). Our fuel use is also down significantly. With our traditional cultivating system we were using 52 litres a hectare (5.6 gallons per acre) and we are now down to 17 or 18 liters a hectare (1.8 or 1.9 gallons per acre), depending on the soil type. That’s a huge saving not only in terms of money but also in terms of releasing carbon dioxide and nitrous oxide into the atmosphere.”

“We currently have a PHD student working here monitoring the effect of no-till practices in terms of water infiltration, chemical leaching from the fields and organic matter availability throughout the year. We’re hopeful in a few years to have some proper scientific numbers to  back up some of the benefits we are seeing in no-till, benefits some farmers are quite skeptical of.”

Testing new integrated farming concepts and coming up with empirical evidence to prove or disprove their validity is common at Overbury and an essential part of being a LEAF farm says Freestone.

“LEAF runs lots of projects themselves and we are sort of the first to put our hand up and say ‘we’ll try that.’ Things like companion cropping; LEAF is really interested in that as a concept, not just for environmental reasons but also to get more diversity in the field. So we’ve been companion cropping for the last three years and we’ve reduced our costs by about £30 pounds ($42 USD) a hectare because we find that we’re applying a little less nitrogen on as well as not putting insecticide on in the autumn.”

“We’re also trying to integrate our livestock into our arable farming more and more. Where we have cover crops we are trying to graze them off with our sheep. That not only means that our grass gets a longer resting period, but that our cover crop gets transformed into a more readily available nutrient source in the form of manure. It’s a no brainer really, because the practice helps stimulate bacteria and fungi growth in the soil, plus helps us feed the sheep through the winter. This is not new, if you turn the clock back 40 or 50 years that’s what they were all doing.”

In 2013 Freestone was awarded a Nuffield Farming Scholarship to study wheat production around the world, and see if practices deployed elsewhere could be used to break the wheat yield plateau in the UK. His travels took him to Canada, the US, Mexico and New Zealand.

“My findings confirmed that we are basically over cultivating our soils here in the UK and destroying their organic matter and structure.  In order to improve our yields we need to employ no-till, have a wider rotation and improve the soil, where possible, with livestock grazing.”

Freestone also returned home with another important observation that would have a big impact on his farming at Overbury.

“I noticed that all the best farmers were using MacDon headers, so I asked them why they had FlexDrapers as opposed to the standard headers their combines come with. I also spoke with another LEAF grower back here in the UK who had imported a MacDon header four or five years ago. The way they all talked about the smoothness of the FlexDraper’s crop flow, its ease of maintenance and the way it flexes over the ground was just ticking a lot of my boxes.”

Testimonials like that led Freestone to purchase a FlexDraper himself for Overbury’s John Deere S685 combine.

“At Overbury we are always looking at the next bit of technology that can make us more efficient and sustainable and the FD1 just seemed to be the next step along that line.”

One of the benefits of the FD1 FlexDraper that Freestone really liked was its ability to increase their harvesting productivity without having to buy a new combine. “If we can get 10% or 15% better output by just changing the header and not the combine, then we want to do that. Our MacDon FD1 is certainly achieving those numbers based on what we have seen so far.”

More than just increased productivity, Freestone says that their FlexDraper has proven to be the right tool for their no-till farming practices.

“We need a header that can leave a nice tall, even straw, plus help us spread our residue uniformly so that our zero tillage equipment can get in there and get the next crop evenly. The FlexDraper is addressing both needs for us.”

Freestone has also been impressed by the FD1’s ability to maintain an even cut on Overbury’s undulating fields.

“Our topography ranges from about 100 feet (30.5 m) to about 1000 feet (305 m) above sea level, and is quite rolling and with stones the size of car tires. But the FD1 just rides over all of that sort of stuff; the way it hugs our rolling banks is just fantastic. We’ve got some fields where if you drive along with a traditional rigid header you’ll have one end up in the air and the other digging in the ground. Our FlexDraper has alleviated that problem.”

“Also something I’m very pleased with is that we’re finding virtually no volunteer peas in our wheat crop, which to me indicates that they are all being combined with no header loss. With our old header we used to find volunteer peas everywhere you walked.”

As you might expect, Freestone has also paid close attention to the economics of the FD1 for his operation, and he reports glowing results.

“The FlexDraper is certainly adding value to our precision farming practices. For instance we boosted our combine’s productivity by 17% across the whole farm last year. Now, admittedly, some of that was because we went from a 30’ (9.1 m) rigid header to a 35’ (10.7 m) FlexDraper. But even with that our forward speed was increased and we were using less diesel per hectare. In total we saved three days harvesting time by having the FlexDraper, so it’s making a huge difference to what we are doing.”

“Here in the UK I’ve very much become an advocate for the MacDon header. I’ve posted videos to YouTube focusing on it harvesting, just because I think it deserves a wider audience over here. Whether you are farming in the west of the country or on one of the big farms in Cambridgeshire or Lincolnshire, there’s savings to be had for any grower.” 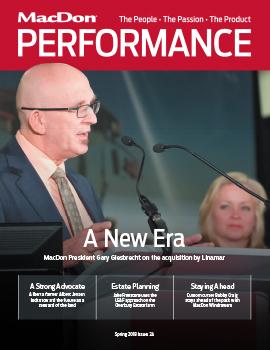 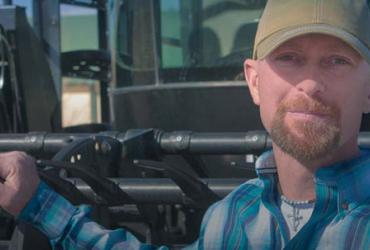 Custom cutter Bobby Craig is constantly looking over his shoulder to check a windrow, a feeling many hay producers would understand.  “When our... 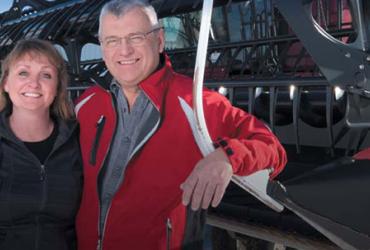 Black gold, Texas tea – as with the Beverly Hillbillies, having oil discovered on their land is a ticket to the good life for many...