One of the first contract windrower operators in Australia, Warren Roberts was early to discover the charms of MacDon.

“MacDons just run better and if you are a contractor that reliability is important.”

With almost 20 years in the business, not many custom harvesters in Australia can claim as much swathing experience as Warren Roberts. In fact, swathing itself only really started to become popular in Australia in the late 70s, so when Roberts decided to sell his farm to start his custom swathing business in the mid 90s, he was in on the ground floor of the new profession.

“I originally drove headers (In Australia a header refers to a combine) and things for blokes, but I got into windrowers not long after that,” recalled Roberts from homebase near Charlton, Victoria, about 155 miles (250 km) northwest of Melbourne. “Back then when I first started, there weren’t many of us contractors about, but we’re quite common now.”

A fencing contractor in the off-season, Roberts says that demand for custom harvesting in his part of Australia varies depending on how heavy the crop is. In a good year, his three swather operation can account for up to 30,000 acres (12,140 ha) of canola, cereal hay, alfalfa, straw and vetch, a low-growing legume popular for livestock feed and birdseed. But in years of drought like this one, many farmers choose not to windrow at all because the crops are too light and that directly affects his business.

“In big years and big crops, farmers don’t seem to hesitate to windrow. But when it’s light, they’ll just go back to the direct cutting with their combines. It looks like there’s going to be a lot
of that this year.”

According to Roberts, the 2014 growing season in Southern Australia has been particularly challenging with farmers faced not only with drought conditions, but low temperatures as well.

“It’s been dry and we’ve had a lot of frosts over the last three weeks. We’ve also had no rain in that time. A lot of the crops are turning yellow in front of your eyes. Some of the canola around here is only six inches (15.2 cm) high and looks like its going to die.”

As bad as things look this year, Roberts says that harvests like this are not uncommon in Victoria and that when demand for his services pick up again, he’ll be ready with his two M150 and brand new M205 MacDon windrowers.

Roberts says that his loyalty is due primarily to the robust build of the machines.

“They’re just a better machine. The fronts especially are very tough and sturdy (In Australia a front refers to a header). We put them through a fair bit of hard work and they seem to be able to handle the tougher going and more hours than other machines.”

“In a lot of cases, especially in vetch, we’re not cutting on solid ground, but instead in sandy risings or heavy flats. That kind of ground is pretty hard going and it’s easy to gum things up. We also find ourselves cutting a lot of trash from the crop the year before such as a heavy weed stubble or clogs of straw from the sowing. Those kind of conditions can be hard on most windrowers, but whatever the challenge, these MacDon drapers always seem to handle it.”

In addition to their ability to handle tough conditions, Roberts also likes that his D Series draper headers give him the ability to adjust reel position and reel speed to crop conditions.

“In some fields you might have to have three different settings in one pass. Being able to have that kind of control of the header from the cab really saves us time.”

With his children still a bit too young to join him, Roberts employs up to six people to help him with his operations year round.

“Usually I have one to two full-timers to help out with the fencing and hire another four men during windrowing season. During harvest we like to run 24 hours a day, especially on the canola. Having six operators allows us to run two shifts with the three machines.”

Roberts says that because he cuts fields in roughly a three hour radius around Charlton, the extra hands are also helpful when it comes time to move from contract to contract. For shorter journeys they typically load the header onto a flatbed and drive the swather to the job. However, for longer commutes they drive the swather up onto the flatbed and tow the header behind in a carrier.

“We can move pretty quick. The boy's average is about 100 hours a week in the machines, not all of that sitting though, as that includes moving time. I think these new 5 Series models with their cab suspension should be more comfortable for them, both in the field and on the road and that’s good.”

But Roberts says he doesn’t want his guys getting too comfortable behind the wheel, as a couple of years ago one of his hires fell asleep and drove the swather into a tree plantation.

“The collision shoved him out of the seat and into the windscreen; that woke him up. Luckily he was OK, but the front was a write-off. Still, the tractor survived great. Like I said, they’re pretty tough machines.”

It’s that toughness that helps keep MacDon the swather of choice for custom harvesters in Victoria, says Roberts.

“I think other machines tend to wear out after about 2000 hours, at least that’s what other contractors are telling me. In the last few years, they’ve all seemed to convert to MacDon. They say they’re making the change because MacDons just run better and if you are a contractor that reliability is important.”

Roberts, of course, isn’t surprised by MacDon’s increased popularity with others in his profession.

“They’re just catching up to something I found out quite a few years ago.” 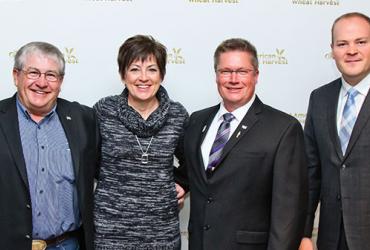 On March 25th 2014, The Great American Wheat Harvest documentary film made its national debut in Washington, D.C. A crowd of about 250 people gathered at... 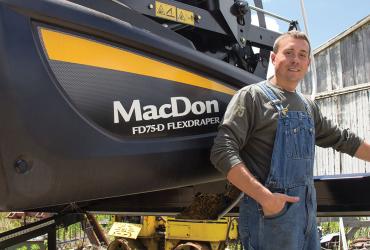 Products mentioned in this article: FD75 FlexDraper® Headers for Combine “We see it all, 30 inch beans, fifteens and drilled. Every planting has its...