Vitamech’s Dudley Fourie gives the story of how the South African firm became a distributor of MacDon equipment.

MacDon’s history is loaded with examples of personal relationships growing into strong business partnerships. In the case of Dudley Fourie, owner of South Africa's Vitamech, it was his relationship with MacDon’s Scott MacDonald that gave his company the upper hand in 2001 when MacDon was searching for a new representative in the South African market.

“My connection to Scott goes back to 1991 when the company that I worked for, Boeresake, started importing MacDon equipment into South Africa,” said Fourie from his company’s offices in Cape Town. “Boeresake was a central purchasing cooperative that purchased for all of the cooperatives in South Africa. Back then Boeresake handled brands like Claas and Massey Ferguson, as well as some shortline manufacturers like MacDon.”

But then when Boeresake went bankrupt in 2001 Fourie was left looking for a Plan B for his future.

Fourie believes that knowing Scott MacDonald “very well” probably gave him an edge over other distribution companies that were also in the running. The new partnership proved to be the right decision for both parties as Vitamech has been able to successfully grow MacDon’s product offering in South Africa from only pull-type Windrowers in 2001 to its full equipment line-up today.

Beyond MacDon draper headers, mowers and windrowers, Vitamech also distributes forage harvesters, grass seeders, cultivators and seed drills to its many dealers across South Africa, plus in the neighboring countries of Botswana, Namibia and Zambia. In addition to its wholegoods business, Vitamech also manages a thriving parts operation selling name brand parts for the products they distribute, as well as alternative parts for competitive brands. In total, Vitamech employs 22 people, all based out of Cape Town, located at the southwest tip of the country.

“We are a family business and all three of my children are in the company. Shaun, my oldest son, is the managing director, Morne, my other son, handles the finance side and my daughter Nadia is
our purchasing manager.”

“MacDon products have an excellent reputation in this country. There is a lot of pride amongst the dealers in South Africa to be associated with a company like MacDon.”

“It is our larger commercial farmers that produce the crops to feed the population and for export,” said Van Der Merwe. Of course there are a lot of smaller family farmers, but they mainly grow only for their own consumption. The interesting part is that of our 34,000 commercial farmers, only around 5,000 of them produce about 80% of the crops grown in the country.”

Of MacDon’s current product line, Fourie says that it is the FlexDraper® that is making the biggest impact in the country, both because of the increased productivity it offers farmers and because of its ability to handle South Africa’s tougher land and harvesting conditions.

“The testing that we’ve done shows you can put more material through your combine with a FlexDraper; about 20% to 50% more than a normal auger header. Farmers also really like how MacDon’s flex system allows it to avoid most damage other headers get. Wear and tear on a MacDon header is much lower than on a normal auger header, or competitive draper headers. When we take the time to show differences like that, farmers acknowledge the fact that the FlexDraper is a better header.”

And being demonstrably better is critical to making the sale.

“You know the farmer has to pay more for a FlexDraper compared to a normal header, but because he gets a better yield with the FlexDraper it more than pays for itself.

Surprisingly, some of the best promoters of the FlexDraper in South Africa aren’t Vitamech employees or dealers.

“We have a lot of young farmers that go to America to custom cut. When they get back they tell everybody, as loud as you know a young man can, that MacDon makes the best combining headers. They are the best advertisement that we can have for MacDon.”

To date, most of the FlexDrapers sold into South Africa have been FD75s, but Fourie says that MacDon’s newer FD1 holds even greater promise for his business.

“The market here for the FD1 is getting better. Today you have combines that have massive capacity, so farmers are getting to the point where they will have to decide whether or not they will continue to windrow or direct cut.”

“The changes that MacDon made to the new FD1 draper header is really perfect for these larger combines. On John Deere combines we’ve measured the performance to be 25% better than the FD75. We also really like how the FD1 custom fits to each specific make of combine. We’ve done a few demos with the FD1 and we were impressed by the ability of the FD1 to perfectly match itself to the combine. Quite a few of the people who saw the demos were also very happy to see that.”

Another MacDon product that is doing well in the market is the M series self-propelled windrower.

“We sell MacDon mower conditioners primarily to farmers who cut high quality Lucerne (alfalfa) in irrigation areas up north. While some of the Lucerne is sold to South Africa’s dairy farmers, most of it is exported to places like Estonia, Arabia and so forth.”

“We have a lot of young farmers that go to America to custom cut. When they get back they tell everybody, as loud as you know a young man can, that MacDon makes the best combining headers.”

“We had one customer that had owned a competitive windrower for just one season, before trading it in for three MacDon swathers. He told me that other self-propelled brands just can’t compare to MacDon.”

As positive as comments like that are, Fourie says that running a business like his today in South Africa is not without its challenges.

While some of the reduction will be due to larger farmers buying out smaller neighbors to stay viable, Fourie says that South African political issues will also play a part.

“There is a lot of uncertainty about what is going to happen here in South Africa regarding land reform, uncertainty that is causing a lot of the younger farmers to move away for other African countries like Zambia, or even places like Canada or Australia.”

“Our commercial farmers are saying that until we know what is really going to happen we are not going to invest in new machinery. That is a bit of a challenge at the moment.”

Another big challenge brought on by the political situation is the volatility it has brought to the South African Rand.

“When we purchased our last shipment of MacDon’s in July the exchange was around 12 Rand to the American Dollar. This morning, just three months later, it is close to 15 Rand. That is a tremendous challenge for us because we have to cover forward to protect ourselves against such huge exchange fluctuations. Now, I don’t like to talk about politics, but the sooner the government comes out and says what they are going to do, the better it will be for us.”

Despite these issues, Fourie says that there is still much to look forward to for his business. One thing that he is particularly excited about is MacDon’s new C Series Corn Header considering that corn is South Africa’s largest crop.

“Maize comprises about 70% of the crops grown in South Africa, so that corn header will be a big opportunity for us.”

And because that header will carry the MacDon name, uptake by South Africa’s farmers should be strong.

“MacDon products have an excellent reputation in this country. There is a lot of pride amongst the dealers in South Africa to be associated with a company like MacDon.” 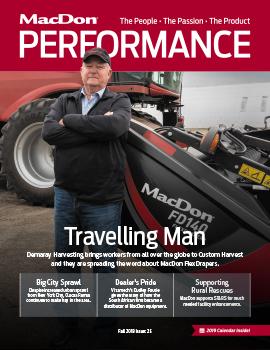 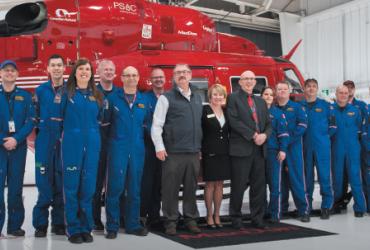 STARS’ helicopter in Manitoba is sporting a new logo these days, thanks to a generous gift from a Winnipeg-based business. MacDon Industries Ltd.... 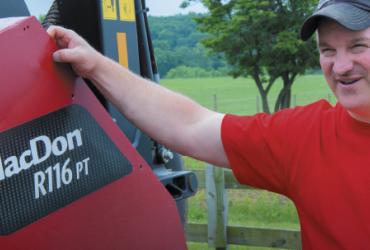 Increasingly unpredictable weather patterns, fickle commodity pricing and ever rising labor and input costs; to be a farmer today is to wake up to challenge...