“My guys say these are the best machines that they have ever Operated.”

Brad Schnoor was fed up.

The Chowchilla, California, farmer who harvests and custom cuts 3,700 acres of alfalfa, wheat hay and oat hay eight months a year, depends on his four windrowers to keep his operation humming. The problem was his windrowers themselves weren’t humming.

“We run our machines 10 to 11 hours a day about 20 days a month,” said Schnoor who says that they do seven to eight cuttings of alfalfa a year. “With [our previous] machines we had probably only three out of four machines running a day. They were down so much I made them take them back.”

That’s when he went out and got four of MacDon’s new M150 windrowers with Dual Direction™ technology. Mounted with MacDon’s next generation A40-D auger headers, he bought them hoping that they would be more dependable than his previous machines, but also wanted to see if they lived up to their advanced billing of increasing productivity. And, boy, did they.

“These new M150 swathers are just fantastic! We are gaining 30% in overall productivity. We probably picked ourselves up a couple days a month since we got them.”

Schnoor reports that the productivity increase is primarily due to three factors – an increase in field speed of about 50%, less down time, and less time spent transporting.

“In alfalfa under good conditions we’re moving up to 5 MPH, whereas before we were cutting at 2.5 MPH on average. We are cutting cleaner and not stripping the hay. In oats we are cutting at 3 MPH in five to six ton crops compared to 2 MPH before.”

He says that harvesting speed has also jumped for him because they can control just about everything on the header from the cab, thanks to MacDon’s computerized header control system which places all header controls at the fingertips of the operator. No longer do his operators have to stop their machines and get out of their cabs to make adjustments to the headers.

“We can really fine-tune the header on-the-go right from the cab. This allows us to easily lighten up the pressure on one side of the header so we don’t plough the dirt. We also run on a lot of borders and we used to run out the edges of our swathers, [so this ability] really helps save the end shields.”

Schnoor says that the ability to adjust things from the cab also saves time when moving from crop to crop.

“We can also quickly jump from oats to sudan to alfalfa. That’s one thing that we couldn’t do with the other machines, which took about an hour to change the reels and make adjustments when moving to another crop.”

He is also very pleased with the reliability and serviceability of his new machines, especially compared to what he had before. He says that the way everything is laid out for quick access makes maintenance much easier.

“Our down time is minimal now. It takes much less time to grease, fuel and oil the machines in the morning. It also seems like we are having less sickle and guard wear. These machine are built to last.”

The M150’s Dual Direction™ capability is also proving to be a big factor in improving his operation’s productivity. Unlike conventional tractors which are difficult to control on the highway at speeds above 16 MPH, MacDon’s patented Dual Direction™ technology allows the operator to rotate the operator’s station 180˚ to face the back of the tractor, placing the tractor in transport mode. All controls move with the operator, so that forward stays forward on the control column. The result is a tractor that has proven to be much more stable allowing it to travel at speeds of up to 23 MPH. Best of all, there is no need to detach the header and transport it on a flatbed, saving some operations even more time and labor when moving from field to field.

“They are quicker for getting from ranch to ranch. They are also a lot more stable because of the Dual Direction™. The drivers like them because they can see the oncoming traffic better.”

Overall the increase in productivity has allowed Schnoor to take on more custom cutting jobs. In fact, on the day that he was interviewed one of his neighbors had asked him to come over and cut his hay crop, which was too damp for the neighbor’s own machines to cut. Other neighbors have just gone ahead and purchased some units for themselves.

“We are seeing a lot of our neighbors changing over to them based on how well they were working for us.”

But increased productivity isn’t the only reason to love the M150’s according to Schnoor. He says that they are very “operator friendly” and that the machine is much more relaxing to drive thanks to the way the controls are set up and the excellent visibility from the cab. He has even seen his fuel costs reduce significantly since switching.

All of this, of course, adds up to a tractor that Schnoor and his team of operators are not sending back to the dealer like the last ones they had.

“My guys say these are the best machines that they have ever operated. I’m extremely happy with them.” 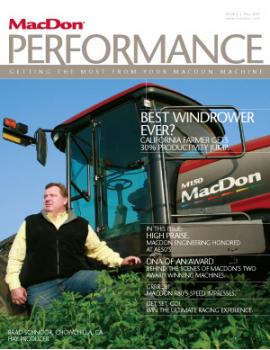 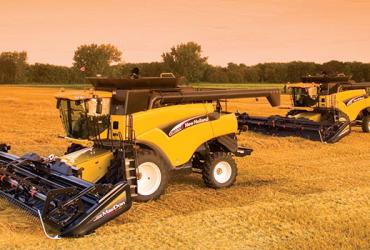 Behind the award: Developing the FD Series

Products mentioned in this article: FD75 FlexDraper® Headers for Combine “The FD70 FlexDraper’s ability to switch from flex to rigid with a quick mechanical... 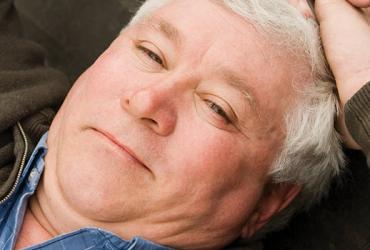 Products mentioned in this article: D65 Draper Headers for Combine “The D60 feeds a lot better across all crops and conditions than any other draper...