“Daddy, is it really that big? That’s twice as tall as our house.”

That’s what Illinois farmer Greg Bigham recalls his nine year old son Grant asking after his son placed a recent MacDon ad on their fridge. The ad (see page 7) shows MacDon’s new 45 foot FD70 FlexDraper® on its end with a six foot man standing next to it. Seen side by side like this a viewer gets a new appreciation for just how wide MacDon’s latest flex head is; in fact it is the world’s first flex draper head to ever be this wide.

Bigham admits that even he was taken aback a little seeing the ad, despite having one of the 45' giants on his farm and being familiar with their size.

“From a distance they don’t seem that wide, but when you get up close you realize just how big they are,” said Bigham.

Greg Bigham farms 11,000 acres of corn, soybeans and wheat with his brother Roy Allen and 10 full and part-time employees near the town of Vergennes, Illinois, about 70 miles southeast of St. Louis.

The 2009 harvest marked the Bigham’s third year with MacDon FlexDrapers. Greg says he and his brother were first sold on the FlexDraper® concept after seeing a demo of the header in soybeans. One of the first things that really impressed the brothers about the FD70s was the opportunity to go wider – an important feature given the fact that their farm has grown rapidly in recent years and they are always looking for ways to be more productive.

Before buying the MacDon FlexDrapers the Bighams had been harvesting with combines mounted with 30' conventional auger flex heads, but they knew that they had to go bigger.

“When we switched to these big John Deere combines you couldn’t get a 40' conventional flex head like you could with the FlexDraper®. Our philosophy was to maximize the capacity of our combines and the FD70s made that possible.”

But going wider wasn’t the only FlexDraper® advantage that impressed the Bighams. More important than the width was the opportunity to reduce bean loss when harvesting their 6,000 acres of soybeans.

“Before, on our conventional heads, the drum grabbed the beans to bring them to the middle, it would spin and crush them, and that always popped some pods open. We always had a lot of beans lying on the sickle where the sections cut the beans off the ground. We could also hear a lot of beans coming off the drum head and hitting the windshield of the combine when the beans were dry.”

Bigham figures that conventional auger flex head design was leaving a lot of beans in the field, something that they could improve on with the gentler handling properties of a FlexDraper®.

“We heard that there would be less loss with the MacDon FlexDraper® head, and that’s exactly what we’ve experienced. As you’re cutting through the field, you can stop the machine and look out at the side, and pull the chaff back, and measure the amount of soybeans that are laying on the ground. There is very little of that with the FD70. Also, we don’t have beans hitting the windshield anymore so we know that there are not any beans being lost like with an auger head. In comparison, the FlexDraper® cuts the beans and lays them on the belt and brings them to the middle without thrashing them.”

And that feature alone is likely putting big dollars in the Bigham’s pockets.

Another feature the Bigham’s like is the hydraulic header tilt, which they are finding a big help under some conditions.

“When it is really dry you can tilt the header back. This is really nice in our double crop beans at night when the dew prevents the heads from sliding easily. When that happens we just tip the headers back and they seem to slide better.”

They also appreciate the header’s flotation, which performs quite well considering the size of the header. MacDon’s use of coil leaf springs on the CA20 Combine Adapter helps make the header significantly more responsive to ground variations than conventional auger heads with hydraulic flotation.

“I tell people that it’s like a rag doll almost; when you pick it up its got springs that make it bounce when you let it down it’s just floating along there. We’re pretty happy with that.”

All in all, Bigham says that they’re very pleased with their move to MacDon FlexDrapers (they’ll likely trade in their 40 footers for 45s in the future), and it’s been a move that hasn’t gone unnoticed in their area. Like with most large farms, other farmers look to see what is working for them and often follow their lead. 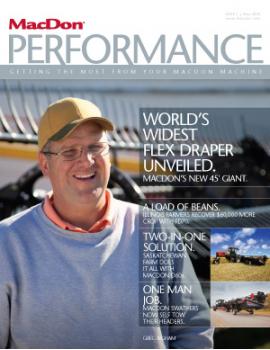 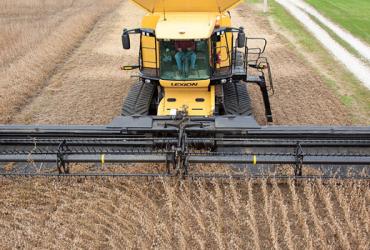 Products mentioned in this article: FD75 FlexDraper® Headers for Combine “Farmers will finally be able to push their combines to their harvesting limits.” For many... 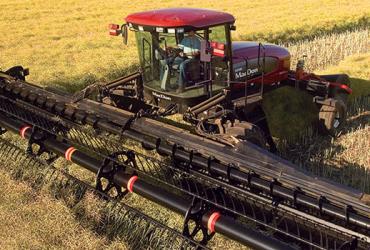 Products mentioned in this article: M Series SP Windrowers, D65 Windrower Draper Header “They are very quiet and comfortable to work in.” Ross Dickins has...