Black gold, Texas tea – as with the Beverly Hillbillies, having oil discovered on their land is a ticket to the good life for many farmers, but according to Alberta farmer Albert Jensen, oil can also bring complications along with the cash.

“We have oil and gas on our land here. In the United States the land owner automatically has the oil rights, but here in Canada that’s not the case,” said Jensen from his grain farm south of Drumheller, Alberta.

Jensen’s 16,000 acres (6475 ha) lie within the province’s large oil and gas field known as the Palliser Block. On the day he was reached for interview by Performance, he had just returned from an ongoing discussion with the company that owns his land’s mineral rights over where, when and how they will drill his property.

“A new company just bought this area and they plan to just drill it out. However, I’m not a guy to just let them drill wherever they want to; I’m a keeper of the land and I told them that yesterday.”

While Jensen admits that he’s not exactly sure how many wells there are on his property (“a lot”), he estimates that every well removes between 6 and 10 acres (2.4 and 4.0 ha) of arable land out of production, causing significant disruption to his business, both operationally and economically. Worse, the land is never fully restored to its previous state once the well goes dry.

“Having an oil company coming in to take a big beautiful piece of land out of production brings us additional challenges. It costs us extra time and money for our large equipment to go around all these drill sites and roads. The power lines that they put in also cause problems for our big sprayers because the lines are not all mapped out.”

Jensen says he is not one to rely on revenue from his oil wells for his livelihood. Instead, he defines his success according to the fortunes of his third generation grain farm, which has grown steadily since the 1970's when the family managed about four and a half sections (1165 ha). Since taking over full management of the operation 15 years ago, Jensen has aggressively expanded the farm’s acreage, primarily so that the farm can stay large enough to survive.

“It’s taken a long time to build this, and a lot of it is due to consolidation in agriculture. Back in the 80's there were probably 40 active farms in this area, but now there’s just five.

From end to end, Jensen’s land runs about 20 miles (32 km), with a good chunk of it concentrated in one large block where he lives, plus many smaller plots scattered around it. Here he grows an equal mix of wheat and canola, with some barley and a few thousand acres of peas thrown in for good measure.

“It’s a big operation, but I’ve created a monster. Growing the operation is what I was put on this earth to do and I feel very strongly that it is mine to protect.”

“As a family we team up with our equipment and will work together. It has been good that my sons have been able to be on their own as a partnership. It has taught them a lot and brought them a lot of pride.”

To harvest their land the family relies on a fleet of nine FlexDraper® mounted Case IH 9230 combines, six owned by Jensen and three by the sons. A 10th combine is not mounted with a  FlexDraper. Jensen admits that the decision to first mount the MacDon product on the front of his Case combines was not an easy one for him to make due to his affinity for a certain shade of red.

“I’m an International loyalist. In fact, one of the things this farm is known for is that we collect antique International Harvester equipment. We currently have over 100 pieces, so we’re kind of like an International museum, whatever you want to call it.”

Jensen says that his loyalty to red paint was cause for more than a few arguments between himself and his sons about ten years ago when they tried to convince him that the MacDon FlexDraper could outperform the rigid headers Jensen was using.

“I always felt that Case made a pretty good rigid header, so when my sons started pushing these FlexDrapers I was totally against them. There was a little friction over it for sure; I was determined in my way and they were determined in theirs.”

What eventually got Jensen to change his mind was the increased size of his operation and the need to deploy even larger combines due to changing economics and labor costs.

“The FlexDraper let us get into the largest class combines as they are the only way to get capacity out of a big machine. There’s really no other choice.”

Initially, increased capacity was the only virtue Jensen could find in his FlexDrapers, so he continued to run a mix of both rigid and FlexDrapers in his operation. In 2011 the first of three disastrous canola harvests opened his eyes to the true value of the FlexDraper, changing his opinion of the product forever.

“We lost a million dollars three years in a row due to some horrendous winds that blew away our swaths, leaving us with school bus sized gobs of crop. We barely survived that actually.”

“After that we decided to switch to direct cutting our canola and our FlexDrapers made that possible.

Now, four years after that decision, Jensen reports that he has been completely converted to the MacDon product as his FlexDrapers have become an essential tool for his operation.

“I’ve gone from being pretty skeptical to completely jumping ship. Not only did our FlexDrapers allow us to eliminate the stress of having to swath, they have let us expand the business more because there are less things to do by eliminating that operation.”

As for performance, Jensen says that the headers have given him and his operators increased confidence harvesting under all conditions.

“With our FlexDrapers we’re not scared of any crop that we go into, and we know that somehow we are going to battle through it.”

Surprisingly, now that he has been converted to MacDon, Jensen reports that he still argues with his sons over their FlexDrapers. While his sons remain happy running 35 footers (10.7m), Jensen traded up to 40’ (12.2m) FD1s this fall and is anxious to put them to the test this upcoming harvest.

“They said that 40 footers (12.2m) wouldn’t work on our hilly ground, but I said that if you are going to put that much more power on these combines then you need the bigger head. Even if you have to go a little slower, having the wider head will make harvesting a lot less stressful.”

But Jensen doesn’t want to stop there as he has his eyes on the 45’ (13.7m) FD1 and the possibilities it holds for his business.

“MacDon FlexDrapers have become a no brainer for us. Our next step is to go to 45’ (13.7m) headers the next time that we trade combines. I’m hoping that will let us go from six to four combines. I don’t think we can, but we can probably go to five.”

One hopes that such future opportunities not only bring more success to Jensen and his sons, but also help to offset some of his frustrations brought on by the continuing wrangles with the oil companies.

“When it comes to MacDon I’ve gone from being a complete skeptic to being a strong advocate. I’m allowed to change my mind right?” 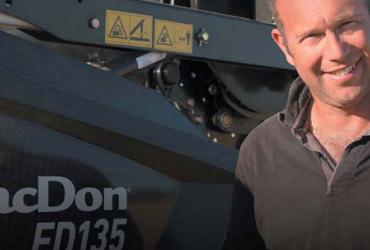 Officially designated by the British Government as an Area of Outstanding Natural Beauty, the well touristed Cotswolds are renowned for being home to scenic pastoral... 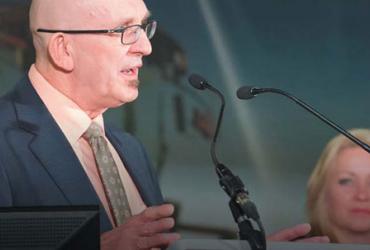 On February 1st, 2018, Linamar Corporation–the international manufacturing conglomerate based in Guelph, Ontario, Canada–completed its purchase of MacDon Industries Ltd. The...